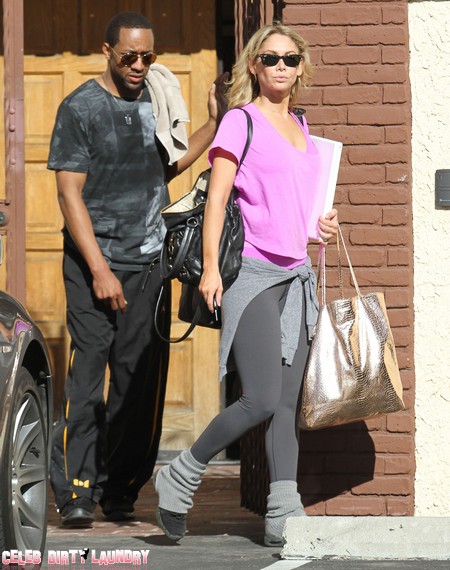 Jaleel White lost his temper at his DWTS professional dancing partner, Kym Johnson, and producers eventually had to intervene to prevent violence as Mark Ballas came to her protection.  White was rehearsing on Friday when he stepped on Kym’s foot causing her to cry out in pain.  Rather than apologize, the Jerkel started screaming at her – calling her an ‘idiot’ – and ‘got in her face.’

Fellow competitor Donald Driver tried to calm White down to no avail – he became angrier and started cursing producers.  Poor Kym left the studio in tears and by then pro dancer Mark Ballas had had enough!   He confronted the enraged bully and got right in his face – at which point producers intervened just before the two came to blows and banished White for the rest of the day.

Us Exclusively Reports:  Dancing with the Stars celeb Jaleel White had a seriously bad rehearsal session with pro partner Kym Johnson on Friday — leading to a “heated” confrontation in which Mark Ballas and show producers eventually intervened, an insider tells Us Weekly exclusively.

The Family Matters alum, 35, “flipped out,” the insider says, after he accidentally stepped on Johnson’s foot. When Johnson, 35, exclaimed “ouch” over his blunder, the insider says, White “got in her face,” and chastised her for “acting like a baby . . . He was shouting at her, calling her an ‘idiot.'”

As Johnson momentarily left the studio in tears, fellow celeb competitor Donald Driver overheard the commotion and “tried to calm him down,” the insider says. Unmoved, White “started going off on the producers and shouting about how they put him with a ‘stupid’ partner.”

Pro dancer Mark Ballas then tried to confront White himself.  As their argument escalated, White spewed: “‘You remind me of that annoying sitcom neighbor who gets into everyone’s business!'”

“The producers stepped in and broke it up before it got physical, but they were really going at it — right up in each other’s faces!” the source explains.

Producers then banished White from the studio for the rest of the day. “Now he says he refuses to go back to the rehearsal studio again, that he wants his own rehearsal space elsewhere,” the source continues. “It was a huge fiasco that went down. A total mess.”

Only one simple solution here – vote the ignorant bully off the show!  Check out Jaleel’s Rumba video performance here!