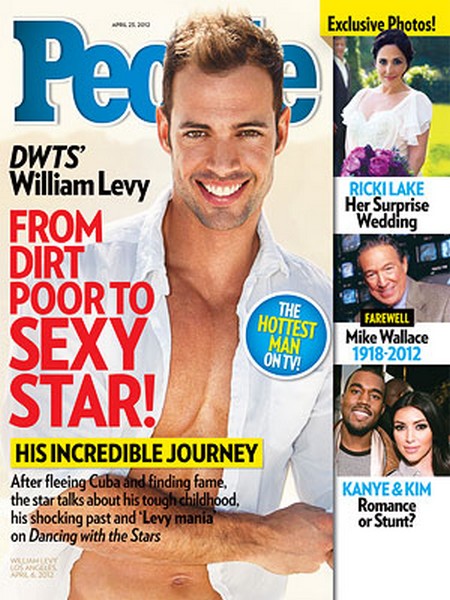 The current issue of People Magazine features the cover story ‘DWTS William Levy – From Dirt Poor to Sexy Star.’  The magazine has all the details of this season’s Dancing With The Star hottie William Levy‘s incredible journey.   William talks to the magazine about leaving Cuba, his tough childhood, how he found fame and his shocking past.  William who was performed a Jive on this week’s DWTS rock themed show was saved for another week.   Although his performace was less than stellar ‘Levy Mania’ has been saving him.

People has the scoop: But while he’s turning millions of heads each week on the ABC hit, Levy, 31, is also marveling at how far he’s come. “To come to this country and receive this kind of love from people you don’t even know, it’s amazing,” he tells PEOPLE in this week’s cover story.

The Telenova star and father of two – to son Christopher, 6, and daughter Kailey, 2, with on-and-off girlfriend Elizabeth Gutiérrez – also opens up about his early lean years in Cuba before emigrating to the U.S. at 15.   “I try to give my kids everything I never had,” he says.

Also included in this week’s issue the magazine has the dirt on Kim Kardashian and Kanye West’s new romance.  They know whether it really is a romance or if it is another Kardashian publicity stunt.   Apparently,  Kanye West will appear on the upcoming season of ‘Keeping Up With The Kardashians.’   Celeb Dirty laundry believes this is why Kim and Kanye made so much noise about sleeping together – it’s all about about publicity for the TV reality show!

To find out all about William’s incredible journey to America and a whole lot more, pick up the current issue of People magazine on stands Friday!