Delusional Teresa Giudice: A Princess In New Jersey Masquerading As A Housewife 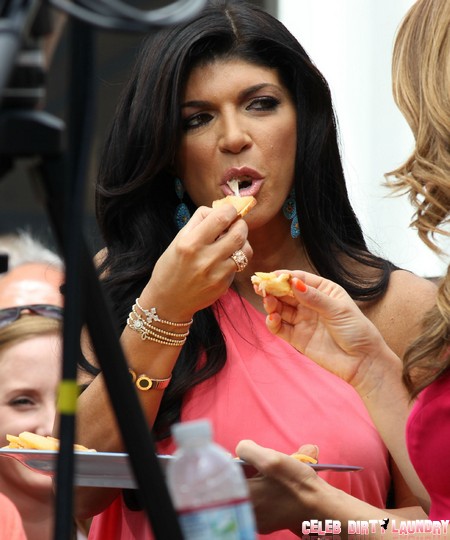 Teresa Giudice works very hard at trying to convince people that she is a princess that just so happens to live in Jersey. Her version of a prince is a bit different than mine though. Her husband Joe Giudice is a foul mouthed douchebag that insults everyone, including Teresa, every chance he gets. Oh and he’s likely going to jail in the next few weeks for fraud, but that’s another story. This season has been brutal for The Real Housewives of New Jersey lightening rod and she has crawled out of the Bravo wreckage with no friends to complain to.

Teresa took to her blog to bitch about the ladies, as usual. But this week she had an epiphany- she is living in Alice in Wonderland and her cast mates are all of the supporting cast!  She dubs Caroline Manzo  “the Red Queen (I don’t think I need to say anything more about that…); her kids are those playing cards, running around trying to make the Queen happy so they stay on the payroll.” She compares Jacqueline Laurita to “the goofy, confusing and very confused Cheshire Cat,” while Kathy Wakile “is the high-and-mighty Caterpillar with her hookah, who insults other people’s intelligence but can’t pronounce words correctly herself.”

What about Melissa Gorja, the woman Teresa has notoriously hated for years simply for marrying her brother?

“I think she’s both Tweedle Dum and Tweedle Dee since she seems to think she can play two different characters at once: the innocent, fun girl who puts on a show falling into a foot of water in a river and pretending to be scared, and her real self with her nasty little comments, blogs, and interviews,”

I almost feel bad for Melissa because the two seemed to have come to an understanding and she really appeared to want a relationship with Teresa. She had her back at the end of the season and I suspect this family feud will flare up all over again thanks to Teresa’s publicly slamming her brother’s wife.

It looks like Teresa has had way too much time on her hands to concoct a seven page blog that teeters on the edge of crazy. Perhaps when emerging from her own personal rabbit hole she’ll have a clearer view of her life. In order to inch towards any type of fairy tale you have to stop kissing the frog and value your girl friends!

Is Teresa bonkers or brilliant because she knows that her scathing analogies will keep extending her fame?  Tell us your thoughts in the comments below!