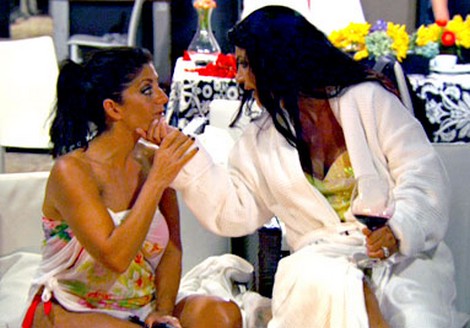 Tonight on Bravo is an all new episode of the Real Housewives of New Jersey called “Hot Tub of Sour Grapes.” On tonight’s episode although the Napa trip started off smoothly, it appears everything has gone down-hill following Teresa and Joe’s vineyard bump n’ grind… Caroline overhears a heated conversation between Teresa and Kathy, and decides to stir up the pot by adding fuel to the fire.  If you missed last week’s show called “Whine Country” there is a full and detailed recap HERE for you!

On last week’s show the great Jersey caravan stomped its way through Napa for a business meeting with a local vineyard. But all work and no play made the Housewives dull gals, and too much horseplay threatened to ruin the deal for good. And in a shocking moment of truth, one phone call could have change Teresa’s life forever.

On tonight’s show Temperatures aren’t the only thing rising as the Housewives round out their California trip with a relaxing dip in the hot tub. Tempers flare when Caroline overhears a conversation between Teresa and Kathy. In one last blowout between Teresa and Caroline, it looks as though some friendships are just beyond repair.

Meanwhile, Joe Giudice and Chris Laurita try to sort out their own issues over wine and cigars, but it turns into a battle zone when the men get involved with the women’s issues that ultimately end in an early departure for some of the ladies.

Tonight’s episode is going to be filled with the usual Housewife drama and you won’t want to miss it, so be sure to tune in for our live coverage of the show tonight at 10 PM EST! While you wait for our recap hit the comments and let us know what you think of “The Real Housewives of New Jersey” season 4 so far! Also we have a sneak peek video of tonight’s episode “Hot Tub of Sour Grapes” below!

Tonight’s recap: Things start off very dicey tonight as Teresa made a huge toast during the last night in wine country, but left Kathy out of it. They two try to hash it out while in the hot tub but everyone else is clearly in earshot. Caroline is off to the side stewing but trying not to get involved.

She’s afraid that she will throw Teresa off the roof if she gets up out of her seat. Kathy is trying to get through to Teresa and insisting that Caroline and Jacqueline are really her friends so she needs to stop bad mouthing them. Teresa is having none of it. She, of course knows best. Caroline has decided that she wants nothing to do with Teresa.

Teresa reappears and she and Caroline go at it. Caroline refuses to believe that Teresa is sorry. She calls her on the carpet for everything. Selling stories to the tabloids, telling the ladies who they can be friends with, not really wanting to fix the relationships within her family. Caroline calls it all smoke and mirrors. Meanwhile in the next room Joe Giudice ADMITS to Chris Laurito that Teresa sells stories to the tabloids! Chris tells the guys that Jacqueline was just offered 50 grand to talk to one of the tabloids but turned it down. Joe thinks she’s nuts. She should have thrown everyone under the bus and took the cash.

Chris decides that this is the time to confront Joe about the crap he has said about him. Apparently Joe has referred to Chris as “shady” and it has made him furious.

Caroline and Teresa’s conversation snowballs and the guys end up involved for a minute. Joe Giudice is screaming for them to end it as Caroline’s husband listens just waiting for a moment to strike. Jacqueline goes through this whole blow up face down, pretending to sleep while both Melissa and Kathy look on in awe. Eventually Lauren steps into the ring to defend her mother.  Teresa keeps screaming that she has never said a bad word about any of them which is kind of hilarious. In every single show Teresa is either backstabbing or insulting at least one of her castmates!

Joe decides the best thing to do is to book an early flight and get Teresa out of there. Melissa and Joe Gorja are leaving with them out of family loyalty, but Caroline already put a bug in Melissa’s ear. She told her that Teresa has said nothing good about her so I’m sure that will play over and over in Melissa’s head until she gets details.  Things are going to get a lot worse before they get better with these ladies.