Demi Moore and Ashton Kutcher Trying To Save Their Marriage 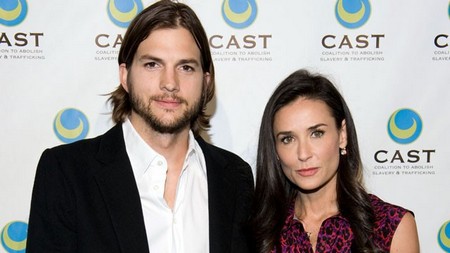 Demi Moore and Ashton Kutcher are undergoing “secret” counseling to save their marriage. What is so secret about their counseling? Huh?

Oh the joy of Hollywood fads, like Scientology and Kabbalah and Bipolar and Tom Cruise. A fad in Hollywood is always used to either save a relationship, save a child from the clutches of Satan or used as a bargaining tool in divorce proceedings, like a marriage is held hostage by a god who likes Universal destruction and mojito’s.

Ashton was caught with his hand in the proverbial cheating jar and his relationship with Demi crashed and burned like Charlie Sheen on a cocaine binge. They never filed for divorce. According to the National Enquirer, “Ashton and Demi are meeting on an almost weekly basis for counseling. They’re bonding and are talking on the phone constantly.” They are attending Kabbalah based therapy sessions with writer Danny Spektor and Rabbi Yehuda Berg who sound like a music group from the 90’s with their one hit wonder, ‘Kabbalah On (Red) Strings’.

Allegedly, Ashton and Demi shared a night of passion at Spektor’s home in Los Angeles. Demi’s daughters, Rumer, Scout and Tallulah, are excited about the rekindling of romance between their mother and stepfather.

“Demi’s daughters have been on the outs with their mother over her breakup with Ashton,” said the insider. “They’d love it if the two managed to work out their marriage problems.”

There is just one slight little snag in this whole drama, namely Mila Kunis. Ashton and Mila have been getting hot and heavy and recently took a three day vacation together. They starred together on “That 70’s Show”. Mila has no idea about the “secret” counseling and Ashton doesn’t know how to let her down easily, even though he wants to remain friends.

There is an underlying irony to all of this as it seems that Ashton and Demi were never legally married, but only tied the knot in the Kabbalah way. Many question the legitimacy of the union, like that time your Uncle Joe married that girl on a retreat where they ate cous-cous and weren’t allowed to swat mosquitoes.

The insider adds, “Ashton feels tremendous guilt over cheating, but he’s always hated how Demi treats him more like a son than a husband. And she complains that he doesn’t give her the proper respect. He also wants his own biological kids, which Demi can’t provide. That’s why Mila has seemed like an attractive option. The truth is that Demi and Ashton have a long way to go before they’re out of the woods.”

It seems that Ashton and Demi still have a few hours left of chanting and cleaning chakras and falling asleep on plush red pillows while sipping liquid from a cup which “allows you to meet your spirit animal”.

We can smell the incense and nonsense burning a mile away.  What do you think readers? Should they rekindle their romance? Would this therapy work?  Let us know in the comments below.