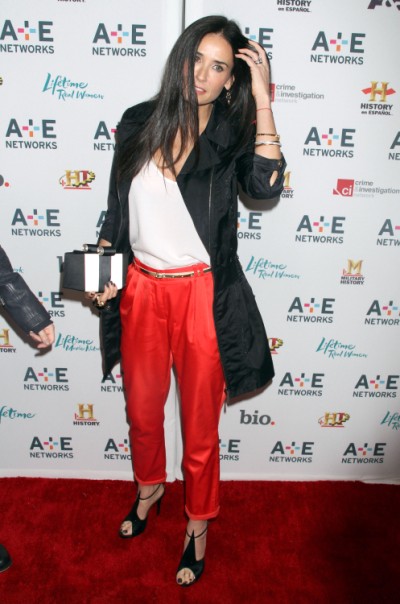 Oh Demi Moore, all we want is for you to start showing some self respect. It doesn’t have to be a lot. I’ll even let you keep those hideous hipster glasses but only if you please, PLEASE clear up this nonsense that you flew all the way to Germany to try to win back your 26-year-old boy toy.

But the pics are so incriminating!

Demi was just spotted in Dusseldorf, Germany for photographer Andreas Gursky’s exhibition at the Museum Kunst Palast. Innocent enough, right? As far as I can tell she hasn’t been working lately and maybe she’s just really into art. The only problem is ex-boyfriend, Vito Schnabel, is an up-and-coming art dealer. Is Demi trying to convince him that she’s more serious and mature than he thought? Because she didn’t seem all that serious when she was couch dancing with Lenny Kravitz, jazzed off red bulls, during her last foray in the art world a couple weeks ago in Miami. Word was out that Vito ended it with her at that time because he wanted to be taken seriously as an art dealer and not be known as the Demi Moore boy toy. According to Page Six, “Vito wasn’t too happy that Demi flew down to party at Art Basel while he was working to build his business. It was a distraction he didn’t need while all the big collectors were in town.”

So is this Demi’s atonement? With her serious Clark Kent frames in tow she’s flown down to Germany to show off her intellectual side? Is it working for you? Not so much for me. The only thing I’m convinced of is that Demi’s a stage four clinger with a lot of time on her hands. I wish I could me more sympathetic. There are all the recent stories out that Demi’s daughters have ditched her again and are asking her to seek treatment so maybe the chick is just lonely. But… still… you’re not helping yourself by following around a kid half your age! He can’t be that special. Hell, at the age, he surely can’t be that interesting. Why is it always so hard for Demi to move on?

So does it seem like the trip is a ploy to get back with Vito Schnabel? Demi Moore can’t be that desperate, can she? How could G.I. Jane come to this?