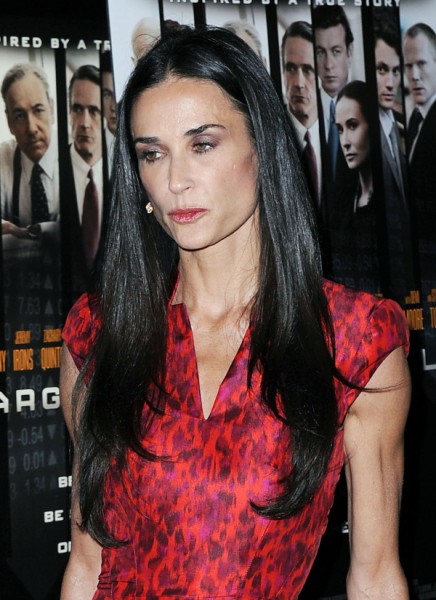 I hate to sound too callous on a Monday morning but… are we surprised by this? Demi Moore has made a nasty habit out of throwing her eggs into the baskets of younger, emotionally immature dudes. Are we to be shocked when she finds out they’re not ready for her kinds of crazy?

But, interesting enough, it could be Demi’s immaturity that got her axed this time around. According to Page Six, Vito Schnabel dumped Demi Moore because he didn’t like being hounded by the paparazzi and he didn’t appreciate her partying antics while he was busy at work.

“Vito has worked very hard to be taken seriously in the art business, and doesn’t want to be seen as somebody who dates celebrities. He hated having photographers follow him around after word got out about him and Demi,” the source said. “And Vito wasn’t too happy that Demi flew down to party at Art Basel while he was working to build his business. It was a distraction he didn’t need while all the big collectors were in town.”

Apparently the break up was around the time of the Lenny Kravitz couch dancing and kitten dinner. But it didn’t seem to break Demi’s stride. On Saturday night she kept the party going drinking and dancing at a few Miami hot spots until 4 a.m. with friends including Stacy Keibler.

So was Demi too wild and carefree for Vito? In the coming days are we going to hear that Demi wanted to keep it casual and fun with the young art dealer but his workaholic nature just didn’t gel with her style? Because it can’t be about the crazy, right? This has to be spun. Demi Moore’s hot! She can get younger dudes! She parties with the A-list (you know, George Clooney’s girlfriend!). Demi Moore’s lifestyle is too intense for 20-somethings! Girls just want to have fun!

Ya, that’s how I see this playing out because Demi Moore was dumped because she acts like a drunken mess who doesn’t know what to do with her life just doesn’t have the same ring to it.