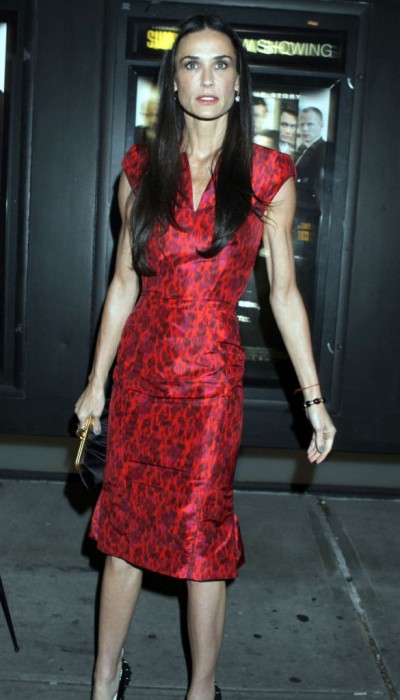 If anyone thinks Demi Moore has finally put the past behind her and is leading a healthy, controlled life right now then you probably shouldn’t look at the latest pics taken of her at a party yesterday. Or do because they are pretty freaking funny. The mother-of-three was seen bumping and grinding all over the place with her hipster glasses firmly entrenched. Damn! You’ve got to hand it to her though. She may be a hot mess but girl looks good. Can you believe she’s 50? Look at that body! Freak of nature… or modern science.

But here’s what I can’t figure out. Does Demi look out of control at the Chanel Beachside Barbecue party or is she just having a really, really good time? And should we bitch on her good time just because she’s been to rehab? I think we can answer the first question by looking at everyone else around her. Lenny Kravitz was also there and the expressions on his face are priceless while Demi’s letting loose. In a couple he’s like, “Dear God, please stop bumping into me. Put your damn arms down and close your legs!” So, perhaps, Demi’s behavior was a little too erratic for some at the party. She could have just been majorly buzzing on caffeine though. Did you see all the Red Bulls in front of her? She’s lucky her little heart didn’t explode!

Too bad we didn’t get any pics of Demi’s rumored new boy toy, Vito Schnabel. He was there but they didn’t pose for pics (lucky him) but sources said they made out for a bit inside the event. Where the hell was the camera guy then? So they’re still going strong. Maybe Demi was doing a happy dance that her love life is getting back on track or  maybe her daughters put her to bed and forgot to lock the doors before leaving her for the night. Who knows? What I do know is I like this Demi Moore way better than the sad sack anti-aging, anti-eating Ashton Kutcher stalker. I’ll take messy over pathetic any day.

Do you think she looked drunk? Demi Moore likes to party so is this an encouraging sign or slightly worrying?