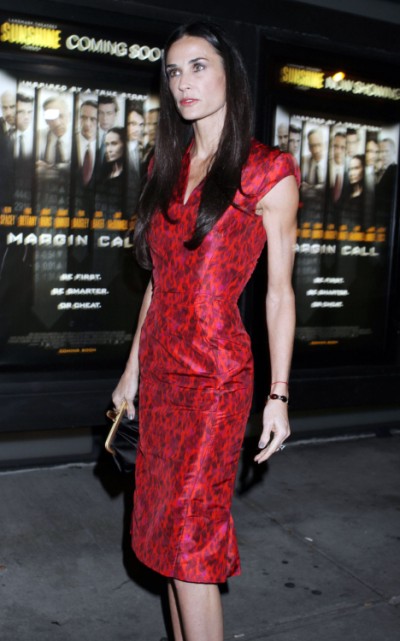 Demi Moore just can’t seem to get over Ashton Kutcher and is willing to pay for someone (anyone) to help her get her happy back. Over the past year Demi’s gone through humiliation after humiliation after Ashton cheated with some young blond around the time of their 6th wedding anniversary. Then came the drugs rumors. Then came the eating disorder rumors and then came rehab. But nothing’s worked. And now that Ashton’s dating the sexiest woman alive, Demi’s on the verge of another breakdown and putting all her stock in a spiritual adviser from Mexico to help her realize that Ashton always has been and forever will be a douche of epic proportions.

If Ashton’s actions didn’t speak loud enough, then how will this woman?

“Since she split from Ashton, she has been a shadow of her former self. It’s now been more than a year since he was caught cheating and she is still finding life very tough,” reported The Sun. “She started seeing a spiritual healer from Mexico who has been trying to help her get over the heartbreak and suffering. She’s been flying her into LA for meetings and it’s already costing her a fortune. She’s now thinking of moving her from Mexico to Los Angeles so she can see her at all times. She is finding it impossible to avoid hearing about Ashton and Mila. Everyone keeps going on about how loved up they are — and she feels it’s being shoved down her throat.”

You only think that Demi because you’ve ripped out every picture of Mila Kunis’ Esquire spread and pasted them all over your walls. You’re a full-on stalker!

I’m all for self-help but it seems like Demi allows other people to tell her how to feel too much. She’s always looking for something outside of herself to believe in or help her believe in herself. It reeks of poor self-esteem. And now she’s got Mila Kunis to contend with. Maybe she should hire two spiritual advisers. I don’t envy those people their jobs one bit.

Is desperate Demi Moore taking this obsession a little too far? I know she wants us to be empathetic towards her (since she just said as much on the cover of People magazine). But how can you feel sorry for someone who essentially tortures herself and refuses to move on? Is Demi Moore spending a fortune and wasting her money on the Ashton Kutcher divorce? Why can’t this woman just accept herself and move on?