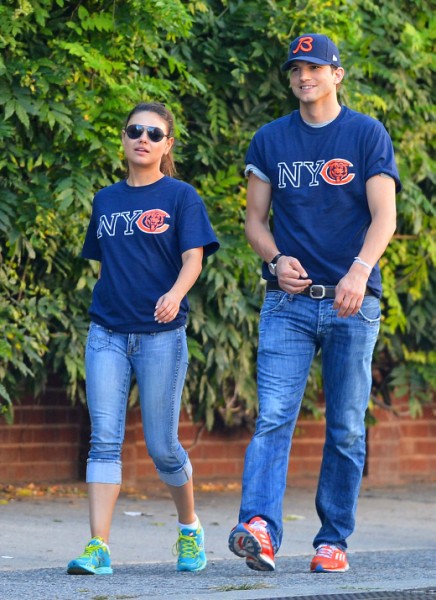 Esquire magazine voted Mila Kunis sexiest woman alive in 2012. She’s bangin’ and half naked on the cover. Today is just not a good day for Demi Moore. Tomorrow probably won’t be either. But relax! She probably doesn’t want to kill herself. She probably wants to kill Ashton Kutcher for cheating on her and then moving on so quickly with the sexiest woman alive. Maybe I’m projecting?

I don’t think so. Demi Moore knew Ashton was going to move on. It was inevitable. But did it have to be with Mila Kunis? Everybody loves her! Guys want her and girls want to be her. It sucks for Demi! And now when she’s not seeing them suck face in NYC, she has to see Mila’s young, flawless body on the cover of Esquire. It’s almost too much. Demi’s crazy but I have to feel for her on this one!

This is how Esquire opens up the story about Mila: “Mila Kunis is the sexiest woman alive. Or as she might say (and did), “If I wanted to charm the pants off you, I could.’ She talks like that and she looks like that, even when she’s really not trying hard at all. A brief encounter with the most beautiful, opinionated, talkative, and funny movie star that we’ve all known since she was nine.”

There’s a lot of ass kissing in that paragraph but it’s totally OK because it’s Mila! You don’t want to do anything but love her. It’s crazy how she does it. Will it change with the emergence of the Ashton Kutcher relationship? I’m not sure. I’ve definitely lost respect for her but a lot of people like Ashton for some reason so I don’t think it will do any real damage – until he breaks her heart. And he will! Trust me. He’s a douche. He talks a good game. He was all into Kabbalah and Demi before he cheated on her with some young, blond slag. If a man cheats on his wife, he’ll cheat on the sexiest woman alive. It’s not a science but it’s pretty tried and true. Oh, but why shit on them now? They’re loved up and happy. Even the most hardened cynic can appreciate love in the air. I just wish it wasn’t with Ashton freakin’ Kutcher!

So relax Demi. Look at the Esquire cover and take a few deep breaths. Yes, Mila looks amazing. Yes, Mila is amazing. But she’s still dating Ashton Kutcher and you of all people know how that ends up!

Do you think Mila’s Esquire cover is a little hard to swallow for Demi? Wouldn’t it be for anyone?