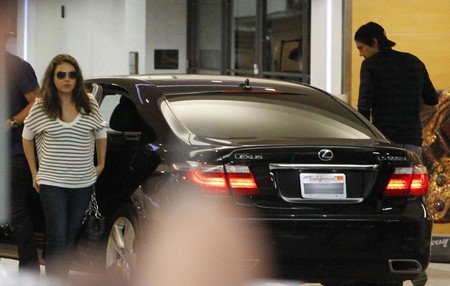 Ashton Kutcher and Mila Kunis are dating and photographic evidence proves it. Despite doing their best to hide it, Ashton and Mila have being spotted on romantic dates over the past several weeks and the news has reached Demi Moore.  Demi is less than thrilled because according to a source she realizes that Ashton and Mila were cheating behind her back while she and Ashton were still married!

This revelation comes as no surprise given Ashton’s history of cheating on Demi with all and sundry – most notably Sara Leal.  Sara went public about her affair with Ashton and this led to Demi’s filing for divorce – as well as her subsequent drug overdose and in-patient treatment for a mental breakdown.  Demi had the scales forcibly removed from her eyes and finally realized that Ashton didn’t love her, and even worse to an egomaniac such as herself, he didn’t even want her.

Now that Demi is finally out of rehab, and at least semi-functional, she can think more clearly –  and what she is thinking about are all those times that Ashton made excuses and slipped out…  Demi has come to the conclusion that Ashton has been ‘hooking up for years’ with Mila.

Now Daily reports: Demi Moore‘s accused Mila Kunis of seeing Ashton Kutcher while he was still with her.

The That ’70s Show co-stars had dinner in LA last month and Demi, 49, is now convinced they’ve been ‘hooking up for years’.

‘She’s remembering things like him sloping off to dos where Mila must’ve been,’ a source tells Now.

What do you think?  Is Demi correct?  Has Ashton been sneaking around with Mila for years?  Or is Demi just paranoid?  Shouldn’t Demi just try to forget Ashton and move on with someone her own age this time around.  Charlie Sheen is single…