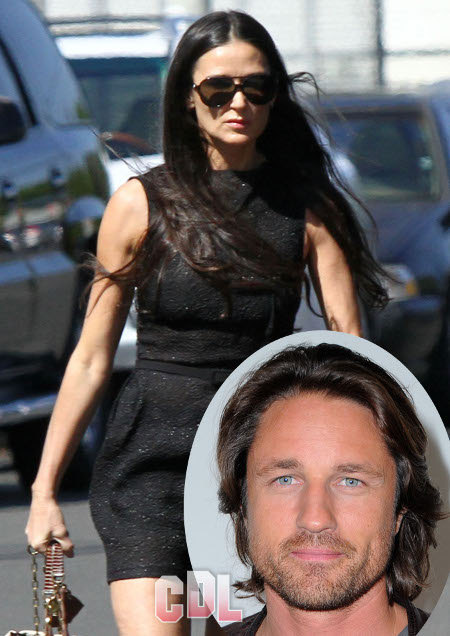 It appeared that Demi Moore has recently been getting very close with actor Martin Henderson and some people assumed that they were in a “new” relationship. But apparently that’s all just one big fat lie that Demi made up! Martin in fact is nothing but Demi’s beard!

The National Enquirer discovered Demi’s ploy to make it look as if she has moved on from her divorce from Ashton Kutcher, when in reality she has not: “The whole thing is a setup on Demi’s part, she’s hanging out with Martin in a desperate bid to make it seems she’s move on from Ashton and got a new man for herself. But she hasn’t. They’re friends and that’s it. The fact is that Martin kind of felt sorry for Demi. If anything, he’s just trying to pick up her spirits. He’s not really interested in a relationship with her at all.”

I guess Demi can’t handle the fact that Ashton himself has already moved on and is now currently dating hottie Mila Kunis — which would be pretty amazing for any guy. One thing for sure is that Mila Kunis is incredibly hot and several men are without a doubt jealous of him, no wonder Demi feels like she has to come out with a “fake” beau to save face.

But really, why is it that Demi can’t move on? Demi and Ashton were married back in 2005 and filed for divorce in 2011, it’s now over a year and a half later and she still can’t find a new man? She’s not that bad looking either, granted that Mila Kunis is a million times better but she should really have no problem getting herself a new man. Let’s hope she doesn’t turn into that creepy ex type for Ashton, you know, the one that can’t move on and stalks you. So far that’s how I see this whole thing evolving, especially since Demi is now desperate enough to come out with a fake “boyfriend”.