Demi Moore’s New Boyfriend Is Half Her Age, Didn’t She Learn Her Lesson? 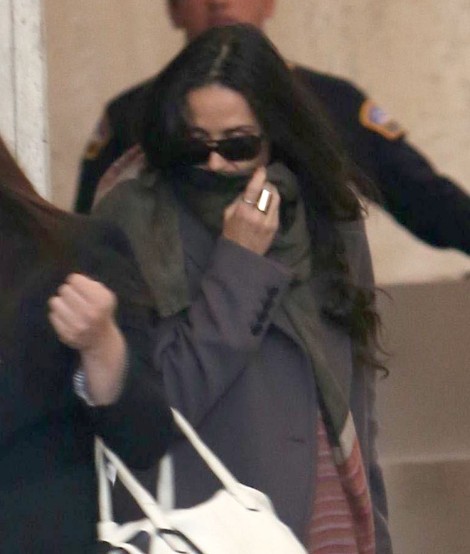 You have to ask yourself, “What is Demi Moore trying to prove?” That she’s still hot? That she’s still in demand. That she’s still every young dude’s Striptease fantasy? Is a young 26-year-old man every going to truly appreciate that when there are so many young 26-year-old women in Hollywood with hot, amazing bodies? Why can’t she learn her lesson and start climbing that age tree? Is she heading for another breakdown or just having some fun? I’m not sure yet but Page Six reports Demi is getting serious with art dealer, Vito Schnabel. Apparently they were grinding all over each other at Naomi Campbell’s 50th birthday party earlier this month and now they’re spending quiet time together. Ugh. Why can’t Demi just use them and move on??

Look, I’m not trying to be ageist. Demi can date whoever makes her feel the best. But is a 26-year-old really, really going to do that? I’d love to see Demi get rid of the hipster glasses and liquid diets and find a nice grown ass man who will treat her like she’s the most amazing woman in the world. That’s what she wants, right? Who doesn’t want someone who thinks they won the jackpot just by being with you? A young guy could do that… for awhile but youth has the tendency to have a short attention span. Is Demi so afraid of aging that she won’t even consider dating someone her own age? Um, knock knock Demi, there are a lot of great looking older men out there. They probably don’t want to handle your crazy though. Now that I think about it, that’s got to be it. Young men kinda like the kooky – older dudes lack the time and patience for that nonsense.

But Page Six could be wrong about all of this. This could just be another faux boyfriend for Demi since Ashton and Mila are flashing the world their love on their European quasi-honeymoon. This could just be a defense mechanism which only shows Demi is choosing men at her own emotional level right now.

Are Demi Moore and Vito Schnabel a good idea? Will Demi Moore’s new boyfriend last or is he not really supposed to?