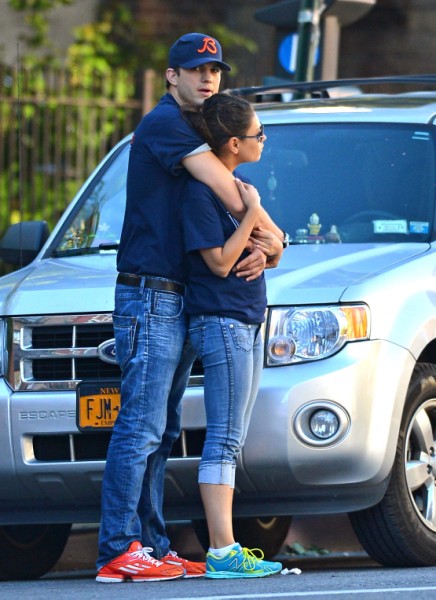 Things are rapidly moving full steam ahead for Ashton Kutcher and Mila Kunis so much so that Ashton’s itching to put a ring on it. And in his infinite wisdom and startling compassion he decided to ask estranged wife, Demi Moore, if she’d give her blessing. Well, true to form, Demi Moore collapsed instead.

According to Star magazine, Ashton thought asking Demi would be positive thing in the Kabbalah healing sort of way which is a nice thought but absolutely sh-t for practicality and Demi responded in kind by freaking out and crying. Apparently she’s on the three oranges a day divorce diet so she didn’t have the fat to withstand the heartache. Has this been the longest divorce pity party ever? Are we over the Demi Moore collapses stories and her unparalleled craziness for Ashton Kutcher? As much as I love a good collapsing story I think I’m almost there.

Oh, and did you hear? Demi and Ashton were married after all. Documents are coming out showing that the couple has yet to reach a financial agreement. Ashton’s being cheap I guess and Demi’s dragging everything out. The woman weighs 10 pounds, has no job and her kids won’t even talk to her! What did you think she was going to do Ashton? Just give the woman what she wants and move on! Oh, she wants your heart? Ya, that’s tricky.

But is this why Ashton and Mila have taken their love on the road? Despite the pics below where Mila and Ashton are trying to hide from the paparazzi, they’ve been huggin’ and kissin’ and showin’ that they care all over NYC lately. It’s very unlike Mila to be that demonstrative but are there ulterior motives at play? Are Mila and Ashton embarrassing Demi into forcing her hand and just divorcing Ashton after all this time? It’s shady and gross but probably highly effective since these divorce numbers are leaking out now. Will we see a divorce soon? I think so but hopefully Ashton will stay far away from Demi when the papers are being signed. Whether she collapsed or not, she’s obviously not handling her ex-husband dating the sexiest woman in the world very well. And Ashton asking Demi’s permission to marry Mila Kunis was just stupid in her fragile state. I can’t decide if he’s an assh-le or a dumb ass. Help me out.