Demi Moore’s Daughters, Rumer, Scout and Tallulah Willis, Refusing To Speak To Her 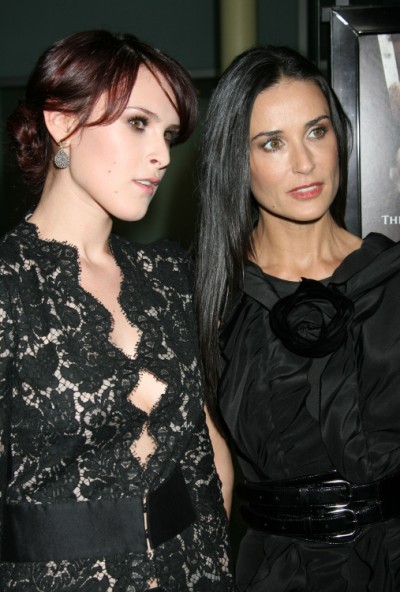 Demi Moore’s daughters are fed up with their mother’s tiring dramatics and are refusing to speak to her. RadarOnline reports Demi’s needy behavior forced the girls to make the decision especially since Demi can’t stand the fact that her girls have been keeping in contact with Demi’s ex and Mila Kunis’ new squeeze, Ashton Kutcher.

The source says the relationship between the three girls and Demi has reached “breaking point” after a series of fights and they have cut off all contact with her.

“Rumer, Scout and Tallulah just don’t want to deal with the drama at the moment,” a source close to the family tells RadarOnline.com. “Since breaking up with Ashton, Demi has been a mess. The girls were there for her through it all — the split and the rehab but now they just feel like they need a little distance.

“Demi is just being very needy right now and the girls are tired of it, they want a mother not another little sister. They are all concerned that she is going to relapse and head back to rehab and they can’t deal with the stress and worry of it.

“The breaking point was Tallulah’s graduation. None of the girls wanted Demi there but she turned up anyway and it was really strained. They had a huge fight afterwards and the girls decided it would be in their best interests to take a break from Demi for a while.

“Another huge bone of contention has been the girls’ relationship with Ashton. They all adore him and talk to him regularly which Demi hates, but he was a huge part of their lives when they were growing up and they don’t want to break off all contact with him.

Jennifer Aniston should send Demi flowers because she’s the media’s new figurehead for sad and pathetic woman. Don’t worry Jen, next week the honors will go back to you, I’m sure of it. I thought Demi was actually getting better but it seems like Ashton could be d-cking her around. Remember those rumors a couple weeks back of the two getting all lovey dovey at a party with Ashton telling a crowd of people about his stupid mistakes? Demi’s heart probably skipped with optimistic joy but quickly deflated when she saw Mila massaging his head over the weekend. But I can’t help but feel bad for her. Yes, the girls should take a hard stance and help her get better but Demi just seems so fragile. She needs her girls and they should realize barring themselves from her might do more harm than good. They haven’t exactly been angels lately either with the naked pics and DUIs.

Who ever though Bruce Willis would be the stable parent in that relationship? I sure didn’t. What do you think? Should the girls be a little more patient with their mother, who’s really been to hell and back, or is their tough love exactly what Demi needs?