Demi Moore And Ashton Kutcher Getting Back Together 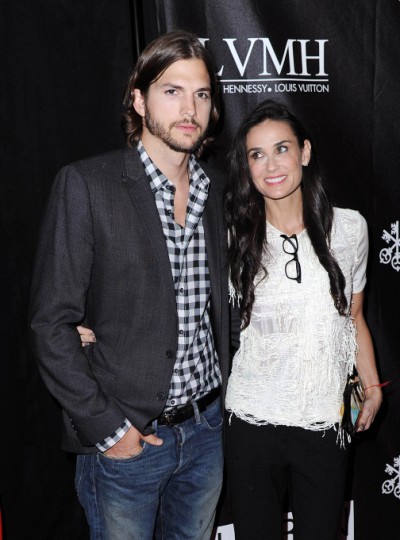 Demi Moore and her estranged husband, Ashton Kutcher, are putting their divorce on hold. Demi has had a devastating year since splitting up with Ashton over cheating allegations but the couple were recently spotted embracing leading many to think Demi hasn’t quite given up on her hopes of becoming Mrs. Kutcher on Twitter once again.

The Mirror reports the couple separately attended a birthday party for the man who officiated their 2005 wedding. According to a source, the couple was “locked in a 60-second embrace” at one point and this wasn’t any ordinary hug. “They are still desperately in love and could be on for a reconciliation. The divorce isn’t being processed right now.”

Ashton appeared to be very emotional and contrite at the party and, while giving a speech for Kabbalah Rabbi Yehuda Berg, he admitted to making, “all these horrendous mistakes in the last year.”

A guest at the party said “Ashton’s voice started to break as he spoke. He just fell into tears. He sat down to a round of applause while Demi just looked frozen.”

Demi took the stage as well. A source recalled, “Demi got up to speak and spoke about family not necessarily being your blood but being people who love you.”

This wasn’t the only indication that the romance could be back on. Ashton was seen with stepdaughter, Rumer Willis in Los Angeles last week sparking all sorts of crazy stories and Demi has been cryptic on her Twitter account again.

Earlier this week she wrote, “We all make mistakes. Don’t let that be the reason you give up on somebody.” She went on to “Like” the following tweets: “Sometimes you have to love people from a distance and give them space and time to get their minds right. #TLS”; and “Cheating on a good girl is like throwing away a diamond and picking up a rock.”

This sounds very promising for the couple. It looks like they are definitely on the mend. Are you happy for Demi or do you think she should keep his cheating heart on the curb?