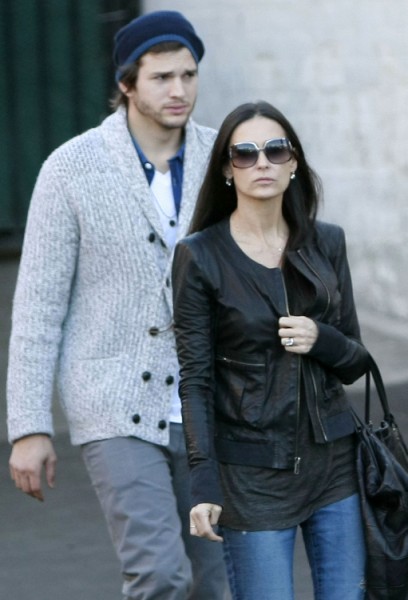 The Mila Kunis/Ashton Kutcher love fest continues to move along full speed ahead. In fact they’re going from one to ten in the blink of an eye. Just this week the camera shy couple make out in full view of the world and paparazzi in NYC and now Mila’s ready to be the next Mrs. Ashton Kutcher and have his babies. Do you think Demi will give up her twitter handle? It’s the least she can do since Mila’s blabbing to everyone that Ashton and Demi were never married to begin with!

According to the National Enquirer, print edition via Celebitchy:

The latest bizarre twist in the bitter Demi Moore-Ashton Kutcher breakup – or as Demi famously cast is, her “divorce!”

Inside sources say Mila Kunis keeps insisting that the rumors are true: Ashton and Demi were NEVER married!

“Mila is now saying she and Ashton want to marry and raise children, and she’s assured stunned pals that he doesn’t need a divorce from Demi because the two were never legally wed in a civil ceremony,” said one source. “They got ‘hitched’ in a symbolic Kabbalah ceremony.”

I don’t know if this is true but Radar Online has a story today questioning the validity of the marriage as well.

I don’t really care too much about those fine details. What I do care about is that pathetic way Mila keeps getting portrayed in this relationship. She’s one heartbreak and twenty years away from looking like Demi. Have you seen Demi lately? It’s not pretty. It’s downright sad. The Daily Mail had pictures of her out somewhere and she looked messed up. Skinny? Sure but her face had this far off look to it like she was on something. It could have just been a bad shot but it was not flattering and only added to the common thought that she hasn’t been doing so well since Ashton moved on with Mila. I know I keep asking this but what does Ashton do to these women to get them to completely lose all sense of self?! Ashton and Demi have been broken up for over a year. He cheated! Why does she keep pining! And Mila Kunis is Mila Kunis. Why Ashton Kutcher? Some girls just need time. I’m going to give it to her but if I keep hearing about babies I don’t know how much more I’ll be willing to give!

Do you think Ashton and Demi aren’t really married and that’s why she hasn’t filed divorce papers yet? Or did Mila and Ashton stage their make out session to force Demi’s hand and move on?