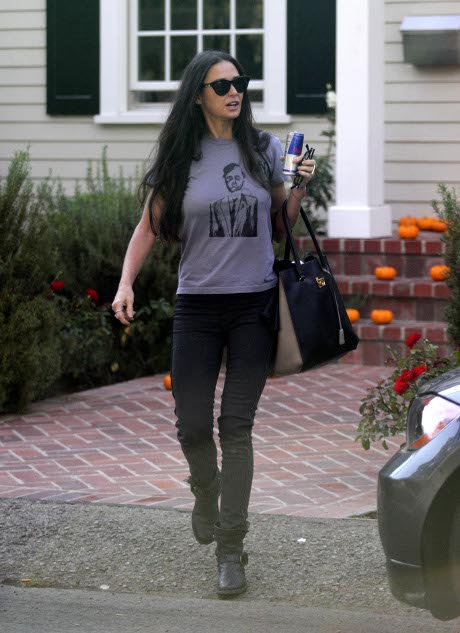 I wonder what is really going through this bag of nuts’ head and by bag of nuts I mean Demi Moore. The aging occasional actress was recently busted in India bumping and grinding all over 26-year old art heir, Vito Schnabel and apparently the hook up wasn’t a one shot deal. Demi is preparing to spend some quality time with Vito in Miami for a high end art exhibit. Vito, young enough to be Demi’s kid in case you over looked the age difference, is hosting a Dom Perignon party at South Beach hotspot, Wall this coming Thursday.

Demi is expected to make an appearance on Vito’s arm, confirming that the two are indeed something – dating? Hooking up? Together for the momentary convenience of it maybe? Whatever it is, it would hold a lot more value if not for the fact that Demi is blatantly refusing to divorce Ashton Kutcher. Her daughters have even begged her to stop finding reasons to hold up the proceedings and to just cut the cord already! Apparently Demi still is too vindictive to do that and she’s enjoying knowing that Ashton isn’t free to be Mila Kunis’ until she says so.

The problem with that whole vendetta is that as long as she keeps Ashton on the hook it’ll be impossible for her to have another normal relationship as well. No guy is seriously going to get involved with Demi right now. Why invest any amount of emotions in a woman that is turning all of hers towards her ex, still? So at this point, Vito is most definitely a boy toy and the big question is how long do you think they’ll last? Tell us your thoughts in the comments below! Should Demi Moore stop seeking out young men?