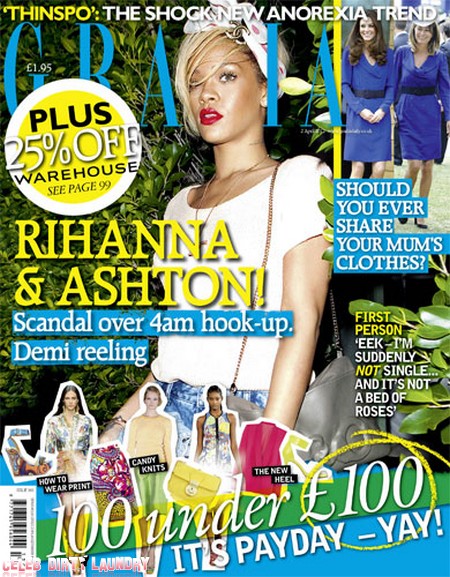 Demi Moore is totally devastated and ‘sick to her stomach’ over Rihanna’s affair with her ex, Ashton Kutcher.  The shock news of Rihanna’s midnight sex-date with Ashton has sent Demi into a tailspin and she is acting crazy according to a source who spoke to Grazia mag.  Rihanna showed up at Ashton’s place for a secret rendezvous at midnight one night last week after partying at Colony and stayed until 4 AM.  A photog captured the whole hot mess and it was all over the Internet for Demi to see.

Since her now infamous late night booty call, it has come out that Rihanna has been hot and heavy with Ashton for the past two months.

According to a source, the pair’s romance has ‘sent Demi spiraling,’ leaving her friends concerned about her mental and physical health.

The source told Grazia magazine:  “Demi is constantly keeping tabs on Ashton so when these pictures came up she was understandably devastated. Demi’s convinced something happened between them and said she felt ‘sick to her stomach.’”

‘Demi’s been acting crazy ever since, trying to find out information about the pair.  Demi is in such a fragile state, even the idea of them together has affected her quite badly.  She’s in a terrible way but, at the end of the day, Ashton is a single man and free to do whatever he likes.”

Demi is totally ‘humiliated’ because Ashton appears to have moved on so quickly and obviously doesn’t care about her at.

A source told Closer magazine:  ‘Demi can’t believe Ashton would do this.  She’s really hurt by the rumors and feels humiliated he’s being linked to other celebrities just a few weeks after she got out of rehab.   She feels it cheapens their marriage even further.’

Demi needs to totally forget about Ashton and move on herself.  The man cheated on her repeatedly during their marriage and obviously doesn’t care about her at all.

What do you think?  Let us know in the comments below.