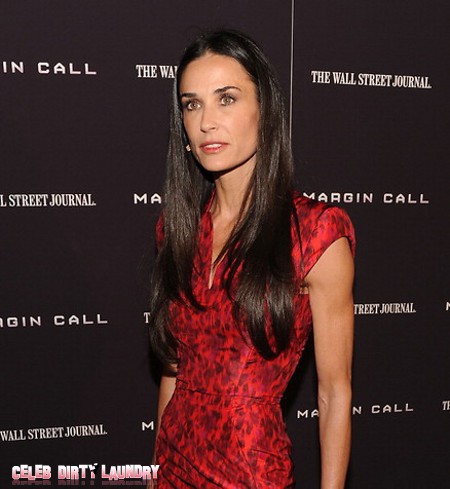 Demi Moore’s daughters are panicking that their fragile mom is in the midst of a relapse and is no longer sober! What a rough several months for Demi Moore’s girls, the Willis sisters Rumer, Scout, and Tallulah. Their attempts to support Moore seem to be failing as the girls fear that their mom is anything but sober.  They were on site when Moore collapsed at home last winter and have subsequently supported her during her rehab stay.  Now it seems that their support is shrinking almost as fast as Moore’s legs.

“They’re really worried about everything she is doing lately and they’re getting mad at her. Demi has been doing things that make them worry that maybe she isn’t staying sober and they’re not happy about her behavior.  The last thing these girls need is dealing with their mother going through yet another episode.”

The family was together this past weekend for Tallulah’s high school graduation and things didn’t appear to be going very smoothly.  A RadarOnline source says,

“Things were really tense at the graduation, Demi did not look healthy and did not seem in a good place. All three girls are concerned she may have relapsed.  Demi said no way when she heard that Ashton wanted to go. She doesn’t like how close he is to her daughters and especially now she doesn’t want them hanging out with him.  Demi and the three girls are not close right now and their relationship is strained with a lot of bad feelings,” the source says. “Things need to change so that Demi’s daughters can feel better about her.”

I’m not sure that I’ve seen anything to indicate that Demi can keep herself together yet.  That nagging insecurity always seems to creep back in and do a real number on her and, unfortunately, her girls.  Do you think she’s sober?  Does the weight look like it’s starting to fall off her again?  Tell us your thoughts in the comments below!