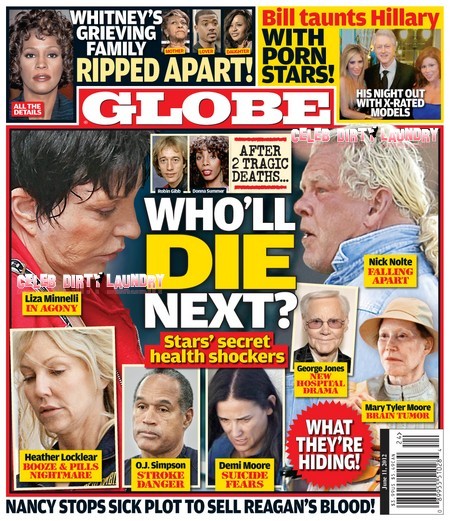 There is a macabre death watch in progress for Demi Moore and O.J. Simpson as well as several other huge celebrities. While the eventual outcome is inevitable, the order and timing of the horrible deaths remains unclear.  The current issue of this week’s GLOBE has the cover story ‘Who’ll Die Next – Stars’ secret health shockers’ that itemizes several celebs’ terminal health problems.  The list of stars likely to pass away sooner rather than later comprise a gallery of very troubled individuals.

Demi Moore jumps right out at us as suicide risk.  After her drug and anorexia induced collapse and subsequent stint in rehab Demi has popped out again in public but she appears to be a mere shadow of her former self.  The psychological problems that drove her past the edge are still present – low self-esteem brought on by her inability to deal with her own aging and Ashton Kutcher’s humiliating affairs with hot young chicks.  Any psychological assessment of Demi leads to the conclusion that she remains at serious risk.

Another celeb at risk of sudden death is O.J. Simpson.  O.J. is locked away in prison and is likely to be there for the rest of his life – which according to GLOBE will be short as he is at serious risk of a deadly stroke.  O.J. is under a huge amount of stress: besides the pain of incarceration and financial ruin brought on by his daughter Arnelle spending all his money out of spite – O.J. is getting fat and beaten up.

Several other of our favorite celebs are facing a gruesome end according to GLOBE. Mary Tyler Moore has a brain tumor, Heather Locklear is totally off the rails with a booze and pills nightmare of addiction, Liza Minnelli is in terrible agony as her health deteriorates, George Jones faces a new hospital drama and Nick Nolte is simply falling apart.  Of course there are lots more details provided in the actually print edition where we will learn the stark truth about these stricken celebs.

GLOBE has all the details this week about what is tearing Whitney Houston’s family apart – between the incestuous relationship of Bobbi Kristina and her brother and the rampant greed of the entire gang things are getting ugly… Grandma Cissy Houston has already called Bobbi Kristina’s relationship with Nick Gordon incestuous and mercenary Pat Houston is attempting to turn the consequences of Whitney’s death into a reality TV show bonanza.

Once again this week’s GLOBE promises to be the superior read in investigative reporting.  With their no-holds-barred approach to the truth you can count on getting right at the core of matters with GLOBE.   I’ll be getting my copy ASAP!

To get your copy of Globe delivered to your door!  Go HERE!