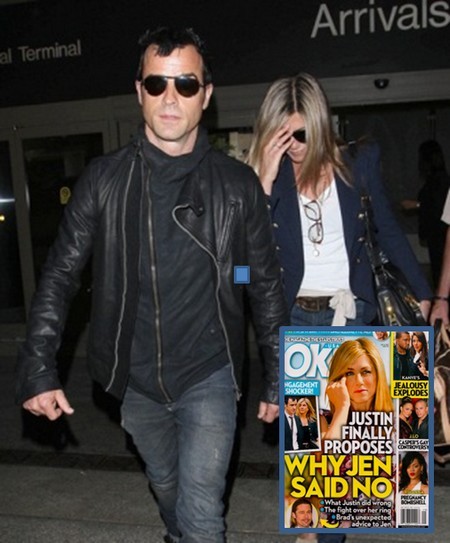 Justin Theroux proposed to Jennifer Aniston but the actress declined her boyfriend’s offer and said ‘no!’ All the world thought that Jennifer was just dying for Justin to propose to her, but now that he has stepped up to the plate, he has struck out. Can you believe it?

According to a source Justin proposed to Jennifer at Hotel de Russie while they were in Rome on their recent European vacation.  The source claims Justin asked Jen ‘to spend the rest of her life with him.’ According to the source Jennifer started crying and ‘told him she loves him and wants to marry him, but she couldn’t say yes.’ We will count that as a firm ‘NO.’ Apparently Jennifer added that: ‘she wants everything to feel right, not rushed.’

All of this is reported in this week’s edition of OK! which has the cover story ‘Justin Finally Proposes – Why Jen Said No.’  The ‘magazine the stars trust’ goes on to explain why Jennifer turned down the proposal she was dying to receive.

According to the source, who somehow knows everything that was said between the couple, Jennifer wants to be engaged and married to Justin – but she insists that it happen naturally and not be forced: ‘she wants everything to feel right, not rushed.’

The source claims that Jennifer expected a proposal while the couple were in Paris and visiting the Eiffel Tower – ‘Jen was expecting him to pop the question especially when they were at the Eiffel Tower.’  But Justin messed up and didn’t ask the question exactly when spoiled Jen expected it… so ‘when it didn’t happen Jen got upset, so they started bickering.’

OK! goes on to explain Jennifer’s pain: ‘she feels like she only got the proposal because she pushed for it.’  Naturally Jen doesn’t want to feel that Justin proposed under pressure just to please her – ‘she doesn’t want a guy marrying her because he feels some sort of pressure.’

Did you ever think that you would read that Justin Theroux proposes to Jennifer Aniston and is turned down?  I didn’t.

Here is our advice – Run Justin run!  Count your blessings – you were turned down and never ever ask again. Could the truth be that Jennifer wants to wait until Brad Pitt and Angelina Jolie are married before she makes news with her own engagement?  Or do you actually believe that Jen is no longer is disturbed about losing Brad to Angie? Let us know in the comments below.