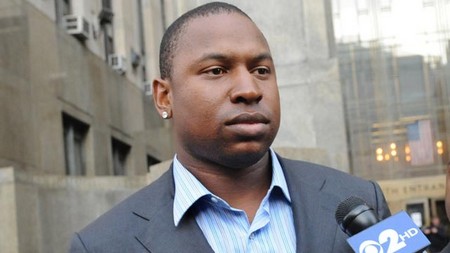 Detroit Tigers’ star Delmon Young was arrested in New York City in April of this year for anti-Semitic slurs he shouted at a Jewish panhandler outside a hotel. According to the incident report, Young shouted, “F***ing Jews! F***ing Jews!” at the panhandler, but was confronted by a concerned citizen who was consequently tackled by Young in the street.  So Young is not a mere racist, he is a violent racist. Young was in town with the Tigers to play against the New York Yankees. He later apologized to his team, but he was suspended for 7 days without pay. In a written statement following his arrest in April, Young said, “I   sincerely regret what happened last night. I apologize to everyone I affected. I take this matter very seriously and assure everyone that I will do everything I can to improve myself as a person and player.”

According to TMZ, the racial remark slinging pig pled guilty today to aggravated harassment. This guilty plea is part of a deal that will see Young perform 10 days of community service, and partake in a hate crime program at the Museum of Tolerance in New York City as part of the Manhattan District Office’s restorative justice program. The court-ordered program will see Young “participate in interactive workshops, videos, guided discussions and special instruction by museum educators to explore issues of prejudice, diversity, and tolerance.”  According to District Attorney Cyrus R. Vance Jr, “Dispositions for defendants charged with bias-related crimes need to be thoughtful and tailored toward healing both the defendant and the entire targeted community.”

If Young pays his debt to society and attends his May 13th hearing having fully completed his community service and without being arrested, Young would be allowed to re-enter a plea of harassment in the second degree and face no more legal action. If, however, Young does not adhere to the legal standards set by the court, he could face a sentence of up to a year in prison.  What do you think?  Is Young getting off too easily for his violent hate crime?