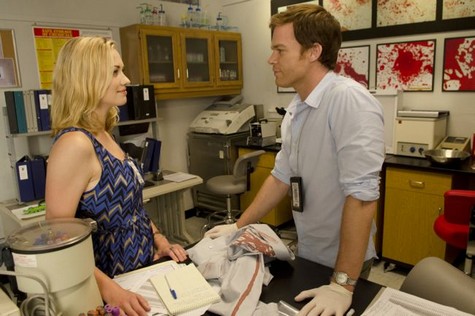 On last week’s as Dexter prepared to kill again he tried to bring Debra on board with his new target and convince her that his targets needed to be eliminated.  The Ukrainian mob got closer to target as they sought revenge for the killing of one of their own.  If you missed the episode you can read our full and detailed recap here.  This week we will find out how Debbie feels after her refusal to let Dexter kill again resulted in another person being killed.  We have a sneak peek video and some spoilers to wet your appetite for next week’s episode 4 titled “Run.”

Spoiler alert: If you’re one of those people who doesn’t like spoilers, stop reading now! We have some juicy spoilers for you about the season 7 episode 4 of Showtime’s “Dexter.”

Serial murder Showtime smash Dexter is really looking to kill this season – the storyline is already edge of your seat tense three episodes in – I can barely wait for Sunday to see what’s next for my favorite avenging angel… If you’re eager to know and don’t mind a few spoilers, read on!

Official synopsis for Dexter Season 7 episode 4: After capturing a deadly killer, things go awry for Miami Metro, sending Debra into a tailspin. In an effort to help his sister, Dexter enters into a dangerous game of cat and mouse, while the Ukrainian mob continues to seek revenge.

Lady killer Speltzer is caught by the cops but walks on a technicality, what can the police do? Nothing. What can Dex do? His bloody best, as usual.

Deb predicts that if her darling brother maintains his calling, “Bad sh*& is going to find him.” Looks like it already has – Viktor’s daddy wants to have a chat with Dex about why he took his son for a posthumous boat ride and I don’t think he’s going to ask nicely!

There’s also new hottie Hannah who’s bound to show up again soon now that Dex has shown a weakness for her and Louis – although fired – is still lurking in the shadows, hell bent on tormenting his nemesis.

The preview for episode 4 also shows us a bathtub full of blood and presumably a person – I wonder who it will be? Could it be Speltzer? Nah, Dexter cleans up after himself better than that – more likely that the Russians got sloppy or there’s yet another killer in town…

Can’t wait for Sunday! Join us here at Celeb Dirty Laundry for a live recap of Dexter, Season 7, Episode 4 “Run” as it rolls out!  Dexter “Run” airs on Showtime on October 21st, 2012.   Check out the preview video & photos of  episode 4 and let us know in the comments below what you think!