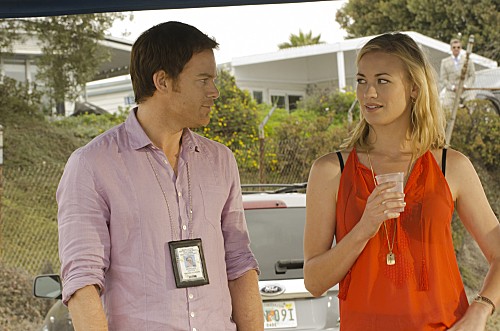 Tonight is an all new episode of Showtime’s DEXTER called “Swim Deep.” On tonight’s episode Dexter seeks to learn why someone was killed on his boat, while at the same time, he tries to outmaneuver Isaak, who is bent on revenge. Did you see last week’s episode? We did and we recapped it for you here!

On last week’s show we saw the continuation of the Speltzer storyline. After escaping them both in last night’s episode, Miami Metro were now be on a massive manhunt. Also after capturing a deadly killer, things went awry for Miami Metro, which sent Debra into a tailspin. In an effort to help his sister, Dexter entered into a dangerous game of cat and mouse, while the Ukrainian mob continued to seek revenge.

On tonight’s show Dexter seeks to learn why someone was killed on his boat, while at the same time, he tries to outmaneuver Isaak, who is bent on revenge. Later, the Wayne Randall case takes a positive turn when new leads are brought to light by his fetching former accomplice, whom Dexter learns is harboring a secret.

Tonight’s episode is going to be another action packed one, which you won’t want to miss. So be sure to tune in for our live coverage of Showtimes’s Dexter Season 7 Episode 5 — tonight at 9PM MDT! While you wait for our recap, hit the comments and let us know what you think of Dexter season 4, so far!

We open on Dexter’s boat.  He’s wiping it down, getting it ready for Harrison’s return as he talks to his father about Deb.  He believes she is adjusting and hasn’t abandoned him while his father believes the revelation that Dex is a serial killer is eating away at her.

Dexter is spraying a cleaner and blood comes out.  He then inspects with a blacklight and realizes that someone was killed on his boat and he didn’t do it.

Masuka is paranoid wondering why LaGuerta is sending evidence to an outside lab.  Deb is now asking LaGuerta if it is about the Bay Area Butcher.  LaGuerta tells her about the slide that was found at the church and that she believes it is a trophy and is not a copy cat.

Deb asks if she needs any help and LaGuerta is grateful.  She gives her the file and tells her it is for her eyes only.  Deb is now in the elevator having a breakdown over Dexter’s mess up.

We move to the lab where Dex is checking the database to find out whose blood was on his boat when he finds out that it was Louis.  Deb walks in to warn him about LaGuerta and that she is going to keep on top of things.  She shows him a list of victims and he names 3 that are his kills.  She is upset feeling as though their situation will never end.  Deb lets Dex know that it is beyond him and it now affects her.  She needs to know more about one of his victims so she asks and he readily gives her information.  Now she’s worried that he could have compromised himself.

Dex gets to his apartment and notices that his curtains are open.  Isaak is sitting inside with a tarp full of tools waiting for him.  Dex then leaves himself a message pretending to be someone else inviting him to a bar.  Isaak leaves to the address Dex has left.  Isaak sits and the waiter informs him he has a phone call. Dex asks why he was in his house and Isaak lets him know exactly why he was there and how Louis called Dex a douchebag and gave him up.  Isaak is now letting him know that he will be going after his sister Deb to which Dex tells him that she has nothing to do with it and that he works alone.

Dex and Deb are in an underground garage and Dex is explaining to her who is after him and most likely after her as well.

During the conversation Dex lets it slip that he is the one who killed Victor because he was the one who killed Mike.  Deb now wants to arrest Isaak, but Dex is warning her against that.  He tells her that Isaak believes the entire Miami police force had a hand in Victor’s death.  Dex wants her to go to a hotel and stay out of sight.  Deb makes Dex promise not to ever take a case from the precinct again to which he agrees.  “Are you lying?” asks Deb.  “I think so” replies Dexter.  She gets upset with him but decides she has no way of knowing.

Dex is sitting in his car when Angel calls him letting him know that Hannah McKay has agreed to walk them through her road trip with Wayne Randall.  Angel and Dex are asking her about her trip and the stops and she points to different “trophies” on the table.  She remembers that they Wayne killed the victims and they both buried the bodies near the hotels.  She was scared when digging the holes not knowing if it was her own grave.  Angel is done with questioning and leaves Hannah and Dex alone.  She begins to play with the giraffe toy when Dex realizes that she is nostalgic instead of upset.

Dex is now reading up on Circo while he and Deb are in a hotel.  She wants to know if he has a plan to kill anyone, to which he replies that he is not killing anybody.  They are going to be and Dex tells her that the bed closest to the doors is hers.  She appears aggravated.  She is now reminiscing about a trip to the beach with Dex as a child and him being her hero.

We are at the beach with Dexter and Angel digging up one of Hannah and Wayne’s graves when Angel asks if he believes Alex’s death was a suicide.  Angel does not believe it was.  He walks away and along comes Hannah to tell Dex about the first time she witnessed Wayne kill someone.  She seems to be flirting and Dex gets nervous and walks away letting her know that he has work to do.

Deb is walking up to a victim’s house when Cpt. LaGuerta shows up.  She wants to sit in on Deb’s questioning.  They knock on the door and the victim’s wife has left, but his son is there.  He agrees to answer questions.  His first answer is that the day of his father’s death is the best day of his life because his father was abusive toward him and his mother.  The last day he saw him was at a wedding.  He has pictures to show them.  LaGuerta believes the killer is in one of the pictures.  This was one of Dex’s victims and Deb may have noticed him in a picture.

Back at the beach they have dug up a couple’s body.  Dex is guessing at how they were killed, who was killed first, and with what instruments.  Hannah starts to walk closer as Dex realizes that a smaller person murdered the victims than Wayne.  He believes Hannah participated in the actual killing of the female.  He stops describing it and stares at Hannah.  He walks away.  Hannah follows him because she wants to know why he stopped.  He turns her palm over and asks how she received the scar there.  He then describes how the woman was killed with a different knife while Wayne killed the male.  Hannah’s answer is “that’s my story and I’m sticking to it.”  She has immunity for giving up Wayne.  “A girl’s gotta protect herself.”

Dex gets into his car but not before noticing Isaak staring down at him from the top of a nearby hill.  They begin to drive off and Dex is determined to keep Isaak right behind him.

Dex parks his car and walks into a bar full of Circo’s enemies where Isaak is soon to follow.  Dex walks out the back way leaving Isaak to be killed.

Back at the precinct Deb is looking over the photos when Sgt. Bautista walks in.  He wants to talk to her about Alex the waiter’s suicide.  He gets a call about Mateo’s Bar.  This is the bar Isaak was left.

At the bar there are bodies strewn about everywhere.  None of which is Isaak Circo’s body.  Deb asks Dex what happened and Dex begins to describe the scene.  He proclaims that there is only evidence of one killer and that he ran out of bullets after the 2nd or 3rd victim.  After sustaining an injury himself, Isaak then began to use a bottle as a weapon.  Kills his final victim and walks right out of the door.

Detective Quin gets a call.  He goes to the strip club to see his stripper girlfriend while Isaak is getting stitched up in the office.  He explains that Quin used to accept bribes.  When Quin gets back into his car he finds a brown bag full of money.

At the precinct Deb asks Dex who the attacker was in the bar.  Next scene we see Isaak Circo in handcuffs.  As they take him to the back he and Dex make eye contact.

Det. Bautista finally gets a chance to speak to Deb about his theory on Alex’s suicide.  Deb tells him to stand down because Mike got justice.  His killer she knows was murdered, but Alex is upset because he does not believe it was Alex.

Dexter goes to the jail to see Isaak.  He wants to know why Isaak is after him.  Isaak tells him that it is because Dex killed Victor.  Dex tells him he killed Victor as revenge for killing police officer Mike Anderson.  Isaak let him know that he too is out for revenge. ..for Victor’s killing.  He then explains his background;   His grandfather’s patience and the pleasure of revenge that he felt.  Dex believes the entire incident is now over.  Isaak lets him know that it is not over.

At the hotel Deb shows up to show Dexter that he was in a photo from a reception.  She saved him this time.  Deb is telling Dex that she knows what his life is about and that she no longer wants anything to do with that.  She is upset that she had to lie to her superior LaGuerta.  She is upset with Dex’s stealing and lying and that is not the person that she is.  She brings up their vacation again at Myrtle Beach and how she could never catch him.  To her Dex was always “just out of reach.”  Reminiscing over, she asks about the blood report.  Dex tells her there is nothing she needs to know about it.  He then takes the picture and lights it on fire.

He will now face everything alone he says.

SEE YOU NEXT WEEK FOR OUR AMAZING LIVE RECAP!