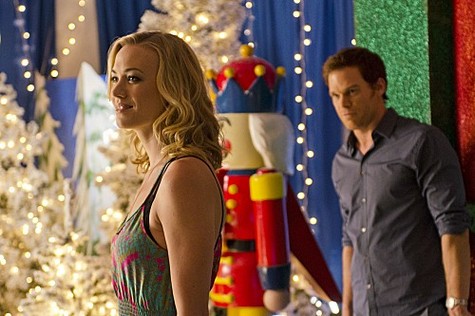 Tonight is an all new episode of Showtime’s DEXTER called “Do The Wrong Thing.” On tonight’s episode Debra befriends a local crime writer who claims to have incriminating info on Hannah McKay; Quinn receives a strange offer and he’s wont to accept it. Did you see last week’s episode? We did and we recapped it for you here!

On last week’s show Dexter sought to learn why someone was killed on his boat, while at the same time, he tried to outmaneuver Isaak, who was bent on revenge. Later, the Wayne Randall case took a positive turn when new leads were brought to light by his fetching former accomplice, whom Dexter learned was harboring a secret.

On tonight’s show Dexter continues his obsession on Hannah Mckay even though there is the more important issue of Isaak Sirko vowing to kill him. He’s pretty confident that Hannah is a killer and wants to give her “what she deserves.”  Debra befriends a local crime writer who claims to have incriminating info on Hannah McKay; Quinn receives a strange offer and he’s wont to accept it; Batista contemplates a business opportunity, while LaGuerta hopes to dredge up new evidence in the Bay Harbor Butcher case.

Tonight’s episode is going to be another action packed one, which you won’t want to miss. So be sure to tune in for our live coverage of Showtimes’s Dexter Season 7 Episode 6 — tonight at 9PM MDT! While you wait for our recap, hit the comments and let us know what you think of Dexter season 7, so far and check out the sneak peek video below!

Tonight’s episode opens with Dexter reading a book at a table and watching Hannah McKay.  He is talking to his father.  “When you like to kill you don’t just stop.” His father tells him that the last time he spoke to Hannah he accused her of murder.  Dex says he needs a peace offering.

He walks into the station in the middle of a meeting.  Deb is clearly agitated that he is late.  Dex can’t focus on anything but Hannah.  He’s now in his lab talking to his dad and he’s trying to figure out what kind of peace offering to give her.  He then decides to change the original police report showing assailant or assailants and removes the latter.  This clears Hannah of all possible links to the murders with Wayne Randall.

At the prison with Isaac an inmate tries to mess with him.  He lets the guy know that he will not be making any deals with him and proceeds to break his wrist.  He then calls George with his cell phone to visit him.

Dex is now trying to catch Hannah before she leaves for work.  She doesn’t seem to be there.  He admits that he watched her for days and never changed her schedule.  He walks around to the back and finds her holding a dead rabbit in her hands.  He gives her the police report and apologizes to her for accusing her of murder and that only Wayne was responsible for the deaths.

Dex reminds himself that he is there because her husband died at a young age.  He tells her he needs a plant to keep talking to her.  They go into the green house.  She shows him a couple of plants and he asks about her husband.  She said he died from a heart attack and he says his wife also died, but was murdered. He realizes that she won’t give up any information too easily so he asks about her place.  She says she got from someone who soon died.  Suspicion is raised again.  “Dead husband, dead owner.”  He believes that she is responsible for 2 deaths now.  He is looking up the owner and finds that Beverly Grey is the previous owner and Hannah was the sole beneficiary.  She also died from a heart attack.

Someone walks into the station and Dex recognizes him as Sal Price, an author of Wayne Randalls murders.  He thinks Sal can help him with Hannah.  He asks Deb about him and she tells him that Sal is there to go over the murders of Wayne Randall.  He wants to write an update.  Unfortunately, Dex has just changed the police report.  He goes to talk to Sal and finds out that he is actually trying to write something about Hannah McKay.  Sal believes that Hannah deserves her own sequel.  When she was in juvie she accused a counselor of sexual harassment and he subsequently died from rat poisoning.

Sal is now in Deb’s office trying to ask her out.  He had just asked Dex to put in a good word for him.  Deb smiles.  It looks like she’s considering it.

Det. Quinn is in the car and Nadia opens the glove compartment.  She sees the money and Quinn tells her that he believes George put the money in there and that she may have had something to do with it.  She says to give it back.  “What good is money if you’re dead.”  Quinn walks into the club, throws the money on George’s desk and tells him he’s not for sale.

Dex is now inside Sal’s home.  He’s starting to go through his computer and finds several files on Hannah McKay.  Year’s worth.  He finds a blood test for Beverly Grey in the files.  He transfers the info to his drive and leaves.

Angel is considering buying a restaurant.  Dex’s nanny, Angel’s sister tells him no.

George is at the prison to see Isaac.  He tells him that Quinn gave back the money.  Isaac tells George not to disappoint him.

Quinn shows up to a restaurant and tells the hostess that he has a reservation.  His table is ready and George is sitting there instead.  George tells him that Isaac wants him to lose the blood evidence linking Isaac to the murders in the bar.  George says he will transfer Nadia to one of his sex clubs in Dubai and she’ll end up slitting her wrist soon after.  Quinn tells George that if he does it Nadia will be free.  They agree and George lets him keep the money.

Back at LaGuerta’s office Deb walks in.  LaGuerta is telling her about her last two interviews but came up empty.  So she’s been going through old files to see if she can find anything on the Bay Area Butcher.  She believes there was an accomplice.  Deb is trying to sway her from doing any other digging, but LaGuerta is determined to look in to it.

Back at his apartment Dex is going through the files from Sal’s computer.  He is talking to his father.  He finds out that Sal bribed the funeral director to see the body of Beverly Grey before embalming. He took a blood sample and found aconite in her system.  A poison known to cause heart attacks and all over Hannah’s nursery.  There’s a knock on the door and it’s Hannah.  She brings him a new plant and tells him he took the wrong one.  She walks into his bedroom and puts the plant on his night stand.  Deb calls.  She has to see Dex now after talking with LaGuerta.

Jordan Chase is the person LaGuerta believes is the accomplice, but Dex has long since gotten rid of him. He tells Deb that she won’t find anything.  Deb believes he moved his girlfriend into the house where his wife was murdered.  Dex is frustrated and losing patience with Deb.  “Let me worry about LaGuerta!”  He tells her.  Then he basically tells her to get a life and even brings up Sal Price.  She tells him to get out.  Dex tells himself that he needs to kill someone.

Dex is at Hannah’s house, but she isn’t there.  The handyman tells him he can wait for.  He starts to ask him about the previous owner.  He finds out that Hannah was the one who took care of Beverly, no one else.  She was also the only one who had access to poison her.  He asks about a wild flower.  The wildflower that contains aconite.  He finds it all over her yard.  He then finds a whole.  “She’s harvested it.”  His father tells him that she may have found a new target.  “Dexter, what are you doing here?”  Hannah walks up behind him.  She offers to make him some coffee.  He doesn’t drink it.  She wants to know what he wants.  He says he wants to take her out.  She says “on a date?”  I don’t think that was what he meant.  She says that is sweet but she doesn’t date.  Since Wayne Randall she’s changed.  She starts reminiscing about her time with Wayne Randall.    She believed that Wayne was the only one who could fill the emptiness inside of her.  She says the fantasy of Wayne was worth her time in Juvenile.

“You know I’m not Wayne, right?”  He wants her to know that he will not put her in jail.  She finally agrees and he gets in the car.  His father questions him.  “A date?  Really?”  Dex drives off after admitting that she caught him off guard.

Quinn is trying to locate Nadia.  She is unreachable.  Angel walks up and asks him if he is impulsive.  He admits that he is thinking about retiring and buying a restaurant.  Masuka overhears and then Deb.  Angel admits that he is burnt out after everything.  Deb assures him that his dream does not sound crazy.  Deb walks into her office and calls Sal.  She asks him out for a drink and admits she needs to get a life.

Quinn is in the evidence room.  He tells the officer on guard that he has to refresh his mind on the case since he has court.  He finds the evidence box and takes out the blood sample.  He puts it in his back pocket and takes off.

Sal and Deb are on a date.  They are discussing his recent theories and projects.  Sal starts to tell Deb that he believes Hannah is not innocent and that he believes she killed with Wayne and continued to kill.  He has the evidence with him and he agrees to show it to Deb.  They are looking at the blood spatter.  Sal says his blood guy believes someone small like Hannah McKay killed the female victim.  Something that Dex already knows and is trying to cover up.

Dex and Hannah pull up to a Christmas wonderland.  Possibly the same one that she wanted Wayne to take her to.  They walk into a tent and she is overcome with happiness.  “I thought maybe if you saw it you could get some peace.”  She says thank you.  “Some of us are never satisfied”, he tells himself.  He then injects her in her neck.  She is tied to a table and tells her that this is what he meant when he said he wanted to take her out.  He takes the tape off of her mouth and she tells him to do what he has to do.  He then grabs the knife begins to plunge it down and instead slices the plastic off that is holding her down.  They take off their clothes and have sex instead.

So we’ll see you next week for a wild live recap!