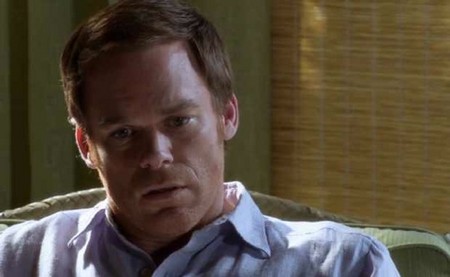 Watching last night’s Dexter, I keep wondering why Dexter can’t see the waving red flag that should be telling him how bad Hannah is for him. The problem is that she’s the perfect embodiment of two of his passions – sex and killing. The problem is – as she so willingly told Dexter – is that she doesn’t operate by a code.

Yes Dexter loves to kill – and had it not been for Harry – he would probably be an indiscriminate killing machine like Hannah. Actually, she’s not indiscriminate – since Wayne Randall’s demise, it seems she’s been quite discriminating and only killed when it enhanced her life in some way.

But for someone who’s literally gotten away with murder for years and had been so careful, it seems sloppy that she would off Sal Price when she had to know she’d be suspect. Dexter of course was demonstrably upset when Sal Price dropped dead in his apartment – mere feet from his A/C unit stashed trophy case and no doubt close to where his kill kit of tools are stored as well.

I do like that Dex has a new woman in his life and frankly, I found Sal Price a bit annoying. I was also really excited that Deb seems to have come around to Dexter’s point of view that some people just need killing. Too bad the person she’s given dear old brother permission to finish off is the sexy babe he’s in the sack with when she called.

And of course, Sirko is out of jail and breathing down Dexter’s neck threatening to kill him and Dex, true to form, is threatening right back. So now we’re up to how many people that know Dexter’s true nature? #1 Deb, #2 Hannah, #3 Sirko… Am I missing anyone? If you asked Harry, I’m sure he’d say this was three too many.

Coming up next Sunday on episode 8 “A Look at Argentina” Sirko tells Dexter that the two of them are much alike and under different circumstances, could have been friends. But then Sirko tries to assassinate his would-be friend Dex at the donut shop – was he buying donuts for cops? How cliché!

Meanwhile, Deb tells Dex that Hannah fits his code and wants to know why he won’t just off her. Dex confessed to Deb that he’s got feelings for Hannah. Will Deb be angrier that Hannah killed her new love interest Sal or that Dex has a love interest that’s not her?

Ultimately, I think Hannah’s going to be shark chum – Dex will always pick his sister over anyone else – Harry made him promise that. I predict that he’ll try to balance the two ladies, but if Hannah makes a threat to Deb, Dex will have her back on his killing table in a heartbeat!