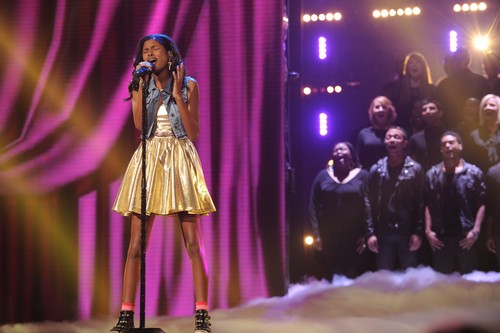 Diamond White took the stage tonight on THE X FACTOR USA for his Top 10 video performance. Diamond White sang “I Wanna Dance With Somebody” by Whitney Houston. Tonight’s show the top 8 performed live in front of coaches Simon Cowell, Britney Spears, Demi Lovato and AJ Reid for America’s vote and to make it another week.

Judges’ Comments:  I have a feeling that the remaining contenders are about to really start fighting for the 5 millon dollar jackpot on The X Factor! Diamond White is up first performing an acoustic version of Whitney Houston’s I Wanna Dance with Somebody that later picks up the beat. It is her worst performance by far and rather than being in the top three I’m betting this rendition drops Diamond further down in the rankings. LA gives her an A for effort. Demi thinks she needs to work on her performance qualities. Simon obviously didn’t hear what I did because he couldn’t praise her enough.

Diamond just may be in trouble this week with that performance, if you want to keep her around – Vote for Diamond White at – 1-855-THE-XF-01