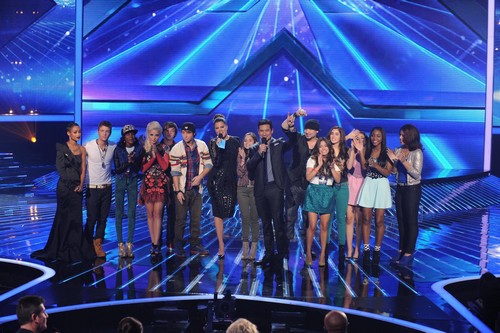 We are more than 1/2 way through season 2 of The X Factor and the competition is getting intense.   This week on THE X FACTOR, the Top 8 will perform songs that hit Number One on the charts.  This week’s performance show will also feature the debut of the new music video of “Scream and Shout” by will.i.am and our very own Britney Spears!

On last week’s show the top 10 artists performed songs of thanks for Thanksgiving on the performance show.  On the follow night on the result show we lost two artists Arin Ray and Beatrice Miller.  Did you see the show?  We did and we recapped it here for you.

Tonight’s show will also feature the details of this year’s Pepsi Challenge, where YOU get to choose the song and various aspects of the acts’ Dec. 5 performance. More details on that after Wednesday.

On Thursday on the Results Show R&B/pop songstress Alicia Keys will grace THE X FACTOR stage to perform her newest hit, “Girl on Fire,” from the album of the same name, which is out today.

Stay tuned to Celeb Dirty Laundry for a full live recap of tonight’s episode. We will keep you up to date on all X-Factor news, reviews and spoilers and make sure to check back here regularly for more information on your favorite television shows! So don’t forget to come back to this spot at 8:00 PM for our live recap of The X Factor USA to see the  Top 8 perform their Songs that Hit Number One On The Charts – recap at 8:00 PM EST!

I have a feeling that the remaining contenders are about to really start fighting for the 5 millon dollar jackpot on The X Factor! Diamond White is up first performing an acoustic version of Whitney Houston’s I Wanna Dance with Somebody that later picks up the beat. It is her worst performance by far and rather than being in the top three I’m betting this rendition drops Diamond further down in the rankings. LA gives her an A for effort. Demi thinks she needs to work on her performance qualities. Simon obviously didn’t hear what I did because he couldn’t praise her enough.

Vino Alan has struggled this week in rehearsals and changed songs at least once. His version of You’ve Lost That Lovin’ Feelin’ really suits him but I’m still not a fan. He sounds really good so I have no idea why I just can’t invest in Vino, but clearly I seem to be in the minority. Okay, Britney agrees with me because she feels like it’s the same thing each week- and Demi agrees. Simon wanted it to all end by the halfway point.

Paige Thomas ignored Demi’s advice completely this week and marched out a mash up of Private Dancer/Never Gonna Give You Up and I think it really worked. LA called it her best performance and it was. Britney thought it was a legitimate risk that really worked. Simon tells her she looks and sounds like a pop star.

Fifth Harmony is one of two groups left in the competition and Ally’s grandfather died this past week, leaving her a real mess. They are singing Stronger by Kelly Clarkson.  They harmonize really well and they have that bit of soul that makes all the difference in a song like this. LA wanted a ground breaking performance, this was just good. He heard them singing in unison rather than harmonized. Demi thinks this is one of their best performances but they are awkward to watch if they stand still during an upbeat song.

Carly Rose Sonenclar is giving me chills while singing Rolling In The Deep. Everyone else can go home because this performance just won the evening. She started off with a gorgeous acoustic rendition and then belted the last verse. LA didn’t think it was her best but says her second best is still better than everyone elses’ first. Demi is proud of her and thinks she’s amazing. Simon thinks the first half was good and the second half was sensational.

Tate Stevens is going to take on Keith Urban’s Somebody Like You. Both he and his mentor, LA think he needs something fun for a change. I’m not a fan of country music but I am a fan of Tate’s. This is fun simply because this guys joy is infectious. Britney tells Tate she’s sure he’ll be accepting a country music award someday. Demi says Tate made her feel like she was back home at a bar-b-que in Texas. Simon thinks it was a great song choice and he is really likeable.

CeCe Frey is performing to Lady Marmalade and I guess it’s okay but I still don’t understand how she is even still here.  What she has done is put on a full performance. She sang AND danced, most contestants cannot do both. LA tells her she’s going down, but she’s going down fighting and he enjoyed the circus. Britney thought it was really good. Simon callers her a try-er. He thought there was too much going on.

Emblem3 closes out tonight’s competition with the old Monkees classic, I’m A Believer. And of course the girls are screaming like crazy and totally recreating that 60’s mob scene that this song makes you picture. I have to say they are harmonizing much better than Fifth Harmony did earlier tonight.  LA  says if he were a chairmen of a record company, which he is, he would sign them. Britney wasn’t digging it and neither was Demi.

Tune in tomorrow night to find out which two contestants will be eliminated!