Did Adele Make A Sex Tape? The Singer Is Planning A Lawsuit Against A French Magazine 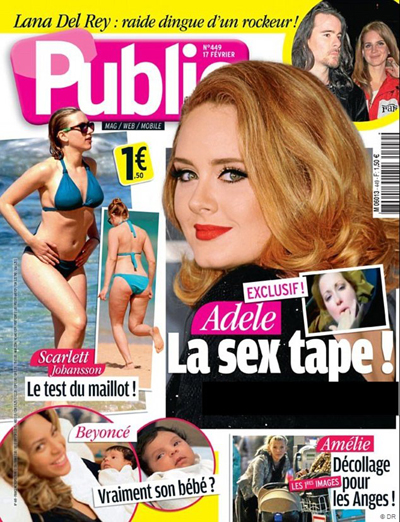 Grammy-winning singer Adele, who swept the recent awards show with six wins, is reportedly planning on suing French Magazine Public for publishing fake photos that they claim came from a cellphone-filmed sex tape she made.

According to the Daily Mail, the 23-year-old singer has denied that the photos are real, claiming that they’re “rubbish,” and is planning legal action against the tabloid.

“We are informed that the French magazine Public has today published images which it claims show our client in a sex tape,” said her lawyers to the Daily Mail in a statement. “Our client has not appeared in a sex tape as claimed in the article. Our client does not appear in the photographs. Such claims are untrue and grossly defamatory. Our client is taking legal action in relation to this matter.”

Still, a denial does not always mean that the photos are fake.

If you remember, Blake Lively cried ‘fake’ about nude cell phone snaps of her that circulated back in 2011 but failed to take legal action, and Scarlett Johansson even came out and confirmed that her own topless photos were real!