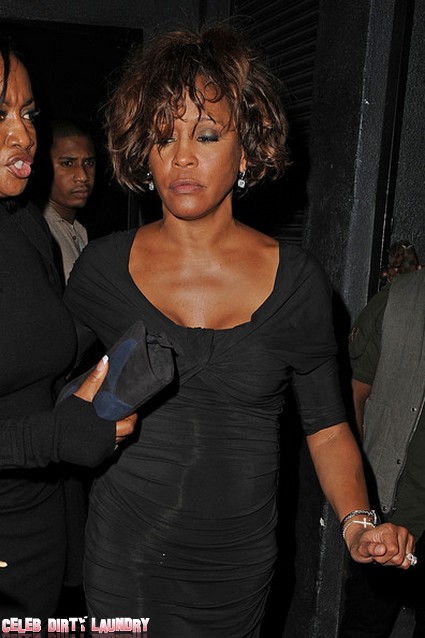 Did Whitney Houston drown in the bathtub of her Beverly Hills hotel room on Saturday? That’s one possibility the LAPD is investigating as they examine the one time crack addict’s sudden death at the age of 48.

According to TMZ prescription drugs were found in her suite on the fourth floor of the Beverly Hilton. There’s now talk she may have taken a cocktail of pills and got into the bath. Her entourage found her unresponsive in the bathtub. When Emergency Services arrived the singer’s body had already been removed from the tub. So an autopsy is needed to determine whether she overdosed or possibly drowned. It’s understood family members identified the star of The Bodyguard.

Meantime more details are emerging about her final days. The one time superstar appeared to be on a downward spiral and was partying heavily. The night before her death she’d been drinking, talking loudly and causing a scene with a group of friends at the bar in the Beverly Hilton hotel. But her mother Cissy Houston and aunt Dionne Warwick paint a different picture. They both spoke to her on the phone that night and say she sounded fine. They saw no cause for concern.

Pictures have also been released of a worse for wear Whitney leaving the Tru Hollywood Nightclub two days before her death. She looked dazed and was in a foul mood. The Mom of one also had scratches on her wrist and blood running down her leg. She snarled at the paparazzi before being driven away.