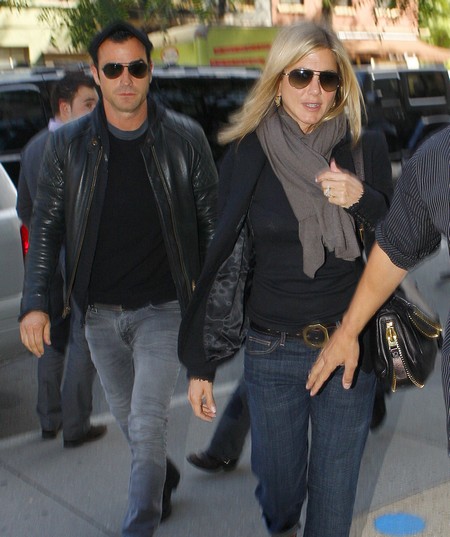 The word is that Jennifer Aniston and Justin Theroux announced her pregnancy to Tom Hanks and his wife Rita Wilson at dinner several days ago.  Tom and Rita are old friends of Jennifer’s – going all the way back to her days with Brad Pitt.  Furthermore, Tom and Rita are not people anyone would be ashamed to be seen dining with.

So why did Jen sneak in through the back door of Katsuya for her dinner date on April 4th in Los Angeles… and why does an eyewitness report that Jen was covering up her stomach?

“Jen was covered up in black and was hiding her stomach,” notes a restaurant insider. “She wanted as much privacy as possible.”  And Justin was apparently super snuggly as he protected his pregnant woman.

All of this is revealed in Life & Style Print Edition, April 23rd:

After weeks of speculation that America’s sweetheart is expecting, a glowing Jen, 43, nibbled on pregnancy-friendly veggie-sushi rolls, seaweed salad, and rice and vegetables while her ecstatic boyfriend doted on her with her long-time friends toasting with Sake.” Justin was very affectionate with Jennifer. He had his arm around her, and held her hand and kissed her,” shares of fellow diner.” They looked like newlyweds!”

Justin has been a constant source of support as Jens paid regular visits to OB/GYN Dr. Robert Katz to see how for tile she is, according to an insider, and to get blood work done to check her hormone levels. After not getting the results they wanted, she’s now switch to OB/GYN Dr. Edward Liu at Cedars-Sinai Hospital in LA.

“I’ve always wanted to have children,” Jen said.” I want to have it all.”