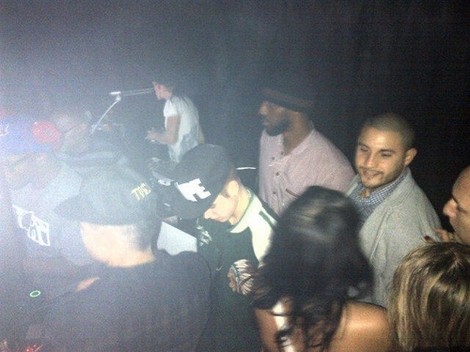 The recently winning Justin Bieber is at it again. No, not cheating with a trout-mouthed supermodel! He is once again terrorizing regular citizens with his god awful lyrics and beats. The Bieber arrived at the Muzik Nightclub in Toronto last night wearing an “oversized black hat with the word DOPE emblazoned across the front in white letters.” A’ight JB.

He was in the city to perform at the 100th Annual Grey Cup half-time show, Canada’s biggest Canadian Football League sporting event. His DJ friend Taye James was scheduled to be at the club, so Bieber followed suit without wearing a suit. Instead, he wore a “letterman-style jacket.” (If we were fashion aficionados we could have told you what that is, but we’re not sure and Google lies to us.)

The Muzik Nightclub tweeted about JB’s appearance, “Justin Bieber is in the house.” The superstar singer stayed in the VIP section and minded his own business. There were no secret liaisons with buxom beauties made of silicone and tears, and there were no female supermodels loitering around the club in any form. Instead, the Bieber’s presence made regular club-goers drunk with celebrity and star power. There was, however, a post-social network drought after Bieber’s appearance, which is a first for the man-child, as Twitter and Facebook usually explode with viral images of the Bieber dancing, clubbing, drinking, canoodling, and performing. Hey, at least Selena Gomez can chill her guava and lock up her green-eyed BFF called “Jealousy.” No need to get those Disney panties in a knot now!

Obviously the Bieber learned his lesson after that infamous Victoria’s Secret after-party with supermodel Barbara Palvin. The repercussions of his little backstage image tweeting left an Eric Roberts type of taste in our mouth when Gomez split from her man (for a week), and Twitter exploded with enraged Beliebers. It was fun, but it soon died down. Now they’re just normal teenagers looking to catch a break again.

Do you think the Bieber will ever dare to speak to another woman again? Do you think Gomez tied him down with the proverbial ball and chain? Let us know your thoughts in the comments below.