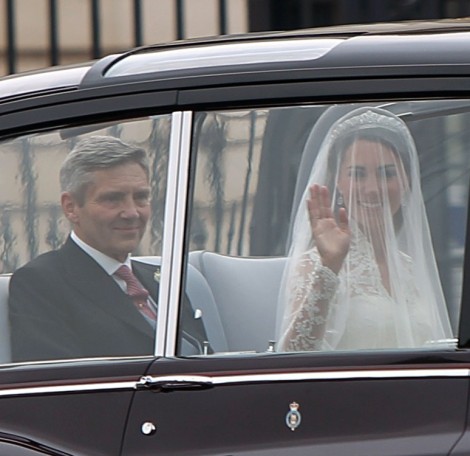 Kate Middleton‘s father, Michael Middleton, always gets off easy in the press. He’s the quiet one with the shy, proud smile who usually lets his wife, the rumored conniving Kris Jenner-type matriarch run the show. But a popular website featuring Kate Middleton’s topless photos and other degrees of undress was mysteriously pulled from the internet and many are wondering if Kate cried to her daddy and he used his bushels of middle class money to come to the rescue.

Can you blame him? I’m sure Michael would buy all the topless photos and burn them if they were for sale. Do you think he tried? There’s no way he could afford them, right?

Richard Eden at The Telegraph reported: “The site, on a UK domain name, which published the paparazzi photographs taken while the Duchess was sunbathing at Viscount Linley’s villa in Provence, had attracted thousands of ‘hits’. Her father, Michael Middleton, declines to comment on suggestions that he might have purchased the domain name. He bought and registered two websites under the names of his younger children, Pippa and James, to prevent others capitalising on their new-found fame. He had missed out on Kate’s internet name.

A St James’s Palace spokesman says the Duchess has not taken any legal action against the website. Meanwhile, a courtier says that ‘as far as I’m aware’, the Middletons have not bought it.”

Well, all fingers do point to Michael Middleton on this one. He has made it his thing to buy up all his kids’ domain names. It must annoy the hell out of him he could never get Kate’s. But would you give that up? That website’s probably a gold mind for hits!

So yes, this is sort of mysterious but what does it prove other than Michael wants to spare his daughter further humiliation? Well, I think it proves that Kate isn’t as cavalier about the photos as she’s leading us to believe. Maybe she wouldn’t mind them on an internet site if she wasn’t going to be queen one day but Kate is nothing if not someone who plans for the future.

Are you surprised daddy stepped in to make sure Kate’s character and modesty stays in tact? One might argue it’s too late for Kate’s modesty but the Middletons and the royals must think the harder the pictures are to find, the harder it’ll be to remember Kate took her top and bottoms off for the world to see! Never fear gossip lovers! I will never forget!