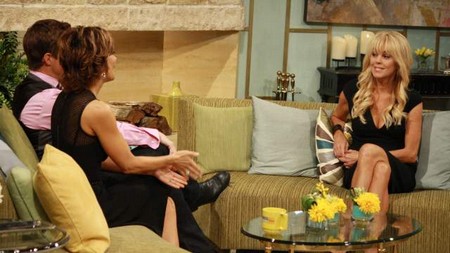 Dina Lohan is spinning her story on Access Hollywood yet again claiming daughter Lindsay Lohan is just like Elizabeth Taylor and prepared and ready to work on Lifetime’s upcoming, “Liz and Dick.”

As prepared as she was to work on Glee? Liz Taylor’s kids are shaking their heads right about now.

Yes, but there’s working and then there’s working. But Dina says she’s been researching the iconic actress and can pull from personal experience to own the role and do it justice.

“It’s such an honor to play Liz Taylor…clearly,” She said. “And they have a lot of similarities. In her [Taylor’s] day – and the tabloids weren’t as crazy then – and Liz, they attacked her as well and she had to get through it gracefully…which I believe she did.”

Oh boy, where to start. First, why does Dina Lohan give interviews? Does anyone else’s mother give interviews? I’m confused. Can’t she see that she does more harm than good since we can see how defensive she gets and know she’s hiding things. What’s crazy is she even admits she does it. Billy Bush asked her about her denials (a.k.a. lies) in the past and she answered, “It’s not about as a parent being in denial. I felt like it wasn’t my place to talk about my personal situation with my children. That’s personal…..Lindsay’s 25 so it’s for her to talk about her demise or whatever was going on at the time. I felt as a mother, yes, I’m going to protect my children publicly, privately, I kick their butts. I’m a single mom, of course I do!”

I don’t think Lindsay’s gotten her butt kicked enough, but whatever. This is why Dina shouldn’t do interviews. It just sounds bad like she’s readying us for Lindsay to screw up again. And does she know what “demise” means because I don’t think it was the right word in that case. Dina Lohan should hope it’s not the right word in any case.  Can you imagine if Lindsay had real problems – like undergoing a kidney transplant like Sarah Hyland?

Anyway, she goes on to say Lindsay’s grown up from all her nonsense and has learned a lot blah, blah, blah.  Broken record, right? Who does she think she’s fooling? She also calls Page 6 a joke and blames the tabloids for misinformation because it’s always someone else’s fault. Lindsay can never take responsibility for ruining her career, her face, her lips. When is Lindsay ever going to say, “yep, I was a mess”?

Because we love underdogs, we really do. Look at Robert Downey, Jr. He’s so candid about her screw ups and now he’s an action star. And Britney Spears is on the X Factor and I’m not even sure she knows what day it is. So it’s not like the American public only wants to watch its stars fall. I think we genuinely want to see Lindsay back on top but we just want to make sure she’s not scraping us along the way during her climb.

Just be honest with us! I think she might find more empathy if she did. How about you?