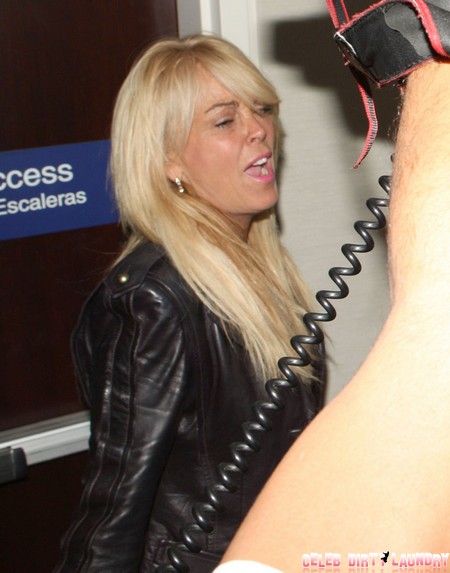 It must have been one hell of a fight between Lindsay Lohan and her usually estranged mother, Dina!  Early this morning CDL told you about a fight between the two that began after leaving a NYC hotspot at 4am.  Lindsay was stuck in a limo with Dina, on route to Dina’s Long Island home when things turned volatile.  Once they arrived at the house the violent fight escalated to the point that a 911 call was placed and the cops showed up.

Now according to TMZ Lindsay actually reached out to her father, Michael Lohan in a frantic phone call regarding Dina’s crazy coke-binge behavior,

“Dad, she’s on cocaine. She’s like touching her neck, and s**t She’s saying disgusting things to me … I’m dead to her now.  She’s like the f**king devil right now. I have a gash on my leg from what happened.”

According to this conversation between Lindsay and her dad the fight began because Lindsay had loaned Dina a whooping $40,000 to help save her mothers home from foreclosure. Somewhere between the huge loan and last night’s smack down, Linds decided she wanted her money back and it didn’t sit well with the aging Lohan. Hell, even I could have told Lindsay not to invest in her mother! Of course a fight erupted! Where on earth is Dina going to come up with that kind of cash to pay her daughter back?

Anyway, I’m betting this fight was worse than is being reported because the one thing Lindsay does not do, no matter how bad the situation may be, is to reach out to Michael!

Will charges be filed and an arrest be coming in this mess? Will Lindsay and Michael reconcile for a minute? Tell us your thoughts in the comments below!