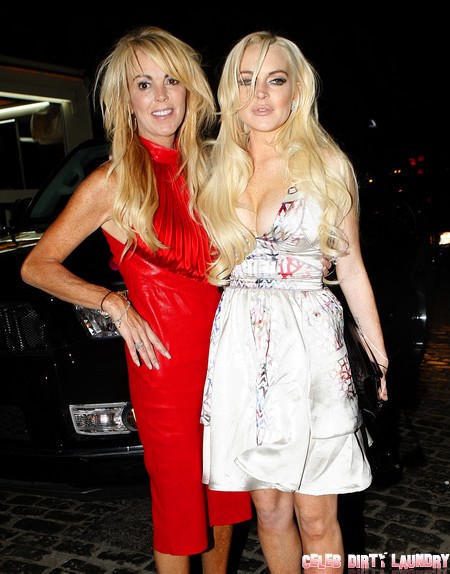 Will this saga of craziness never end? Early this morning Lindsay Lohan and her mom, Dina Lohan, were in a New York City club until 4am (just a regular night, right?). They left, got into a chauffeured car, and begin the drive to Dina’s home on Long Island. At some point during the drive, the mother and daughter duo began arguing. The 911 call says the official concern was domestic violence, and the caller told police that Lindsay was being held against her will by Dina and the driver.

A TMZ report also said that the fight became physical, ending with property damage (Lindsay’s bracelet, which I’m sure Harry Winston can fix) and a cut on Lindsay leg!

Unfortunately this is not the first chapter in their sad story. Dina has never been a good role model—in fact, it was she who introduced her daughter to clubbing, alcohol, and drugs. She admitted to being responsible for turning Lindsay into a crack head.

We watched in horror as Dina appeared drunk on Dr. Phil a few weeks ago, and then insulted him afterwards. Lindsay was finally clearing up her legal battles until she hit a pedestrian in New York City last month. Lindsay also claimed she was attacked in her hotel suite. Whether or not it’s true, you can’t deny that trouble follows Lindsay. Or is it the other way around? Check back for updates as we get more news!