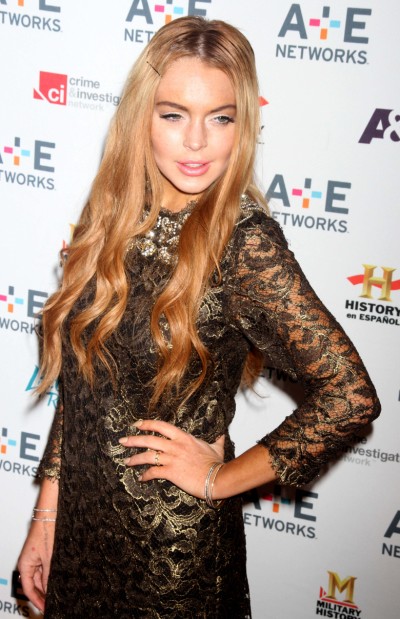 Sources are reporting that Lindsay Lohan has become quite obnoxious over choosing the right Dick for her Liz. With shooting for her Lifetime comeback vehicle, Liz and Dick, set to begin in a few weeks, Lindsay is beside herself with worry that she hasn’t found the right actor to play Elizabeth Taylor’s ex-husband and sparring partner, Richard Burton.

RadarOnline.com reports choices to play the role of Burton have come down to Gossip Girl star Matthew Settle, Sean Maguire, and CSI’s Craig Robert Young. But Lindsay is not feeling them. “Lindsay declared that none of the actors were the right fit and that she wanted to go to London to look for a possible Burton actor there,” a production insider said. “Lindsay is being an absolute nightmare about who should play Burton. She believes Matthew Settle is too old to play the role, and she wants a major A-list star to be her co-star. However, her salary for the role took up a major portion of the budget, and the Burton gig will likely only pay $200k, max. The producers don’t need to get Lindsay’s approval of who will play Richard Burton, but they want to keep her happy.”

Lindsay does understand that this is a Lifetime movie, right? It’s not like Russell Crowe is going to shake his head at this missed opportunity. But, no, of course she doesn’t realize this because it’s all about her. Lindsay is (or was) talented and she probably does get that she needs to generate some heat and chemistry with her co-star if this movie is going to give her the comeback she needs. But she’s delusional as all hell if she thinks she’s going to find it in Lifetime’s halls. A-list actors make real movies – not Lifetime movies. Ergo Lindsay, you are not A-list anymore and shouldn’t start busting out orders. You should be thanking your lucky stars the casting agent had a lapse of judgement that day and hired you to play Elizabeth freakin’ Taylor!

Luckily it sounds like the people in charge aren’t taking Lindsay’s demands too seriously. When asked if they were actually considering going to London to find their Burton the source replied, “Hell no! There just isn’t any money in the budget, or time, to do so. The producers will try to land someone that Lindsay likes, but, if push comes to shove, they will just cast the role without her approval.”

I can’t wait for this movie! Can you?