Do You Recognize Rihanna Without Make-Up? (Photo) 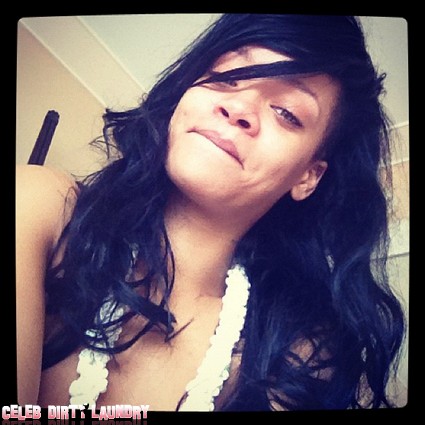 Rihanna has posted another naked picture of herself on Twitter – but this time it’s her face that’s au naturel. The Only Girl in The World has done what many women wouldn’t dare – upload a picture without makeup for the world to see.

RiRi posted a link to the Instagram pic on her Twitter account last night. She tweeted ‘Just got “laid” #hawaiinleiLIFE’. Before you think it’s the singer being her usual controversial self – have a look at what’s around her neck. It’s actually a play on the word lei. Some fans were slow to catch on and misinterpreted the innuendo thinking she was boasting about her bedroom conquests again. Hey – easy mistake to make with this superstar!

You never know what Rihanna is going to tweet. She must be a record company’s worst nightmare. Sometimes it’s nip slips, other times it’s suspicious looking recreational activities or it’s just a good old fashioned flesh fest. Celeb Dirty Laundry has been following her exploits online and she definitely leaves a lot less to the imagination than other chart toppers Rihanna’s Naked Holiday Photo Album

But what’s she playing at…attention seeking or showing her exes what they missed out on? She still holds a flame for Chris Brown despite his shocking behaviour a couple of years back. Are these continual pictures part of her plan to get him back or just remind him what he could have had. Either way her almost 18 million Twitter followers aren’t complaining! The pictures have made her one of the most followed people on the planet.