Does Ben Affleck Want To Have A 4th Child To Keep Jennifer Garner From Returning To Acting? 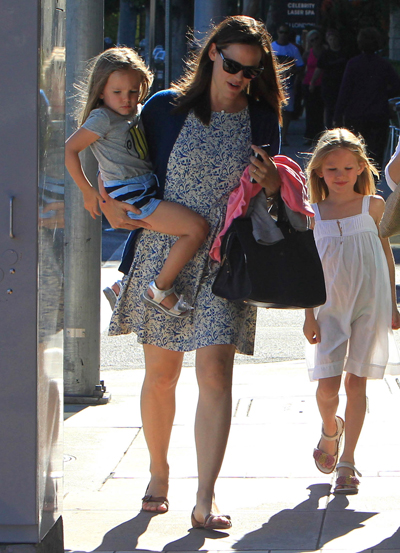 Jennifer Garner, the one-time action star who’s pretty much a professional mom these days, just gave birth to her and husband Ben Affleck‘s third child, a son named Samuel, back in February, but already US Weekly is reporting that Ben is pushing her for another child!

Reportedly, now that she has a son and two daughters (Violet, 6, and Seraphina, 3), Jennifer feels all set with children but not Ben.

“Jen is happy with three now that she has a boy,” said a friend of the couple. “Ben wants four.“

Why do we get the feeling that after they have four, Ben might decide that he wants to keep up with the Jolie-Pitts and give their kids a few more siblings? Related: Jennifer Garner Gives Birth To A Baby Boy!

While Jennifer used to be a major star during her Alias days, since having kids, her career has consisted of small, forgettable roles in movies like Juno and Arthur, and perhaps that’s the way that her 39-year-old husband likes it. After all, while she’s been raising the kids, he’s launched a new phase of his career as a film director.

Notably, when she recently accepted the “Female Star of the Year” award at CinemaCon, she thanked Ben “for taking over drop-offs and pickups and bedtime so I could make it [to the event]. And thanks for making me feel like maybe someday I will get to relax in a hair and makeup chair again and leave the maniacs at home with you!“

It’s clear that Jennifer is missing being an actress, but while Ben is currently filming a new movie in Puerto Rico, the 40-year-old mom of three will just have to content herself with visiting him on set.