Does Recently Separated Vera Wang Already Have A New Boytoy Moving In With Her? 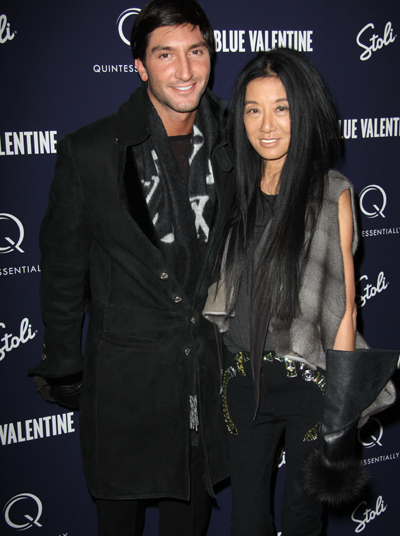 When Vera Wang, the designer of the world’s most fabulous wedding gowns, announced that she and her husband of 23 years, Arthur Becker, were getting divorced, we were saddened but not shocked. (After all, how many married couples actually make it to their golden wedding anniversary these day?) But it seems there could be a juicier twist to this breakup story.

According to the New York Daily News, the 63-year-old fashion designer may already have a young, boytoy moving into her Beverly Hills home: 27-year-old Olympic ice-skater Evan Lysacek.

Granted, Vera has multiple homes, including one in New York, but according to sources there is “something going on” between the two. However, another source downplayed the idea of a sexual relationship by suggesting that the fashion designer is ““just enamoured with him and enjoys his company.” Related: Zoe Kravitz Does Vera Wang Princess

The two met when Vera designed costumes for Evan for the 2010 Winter Olympics, and Evan even interviewed her for Interview Magazine.

Still, the timing is certainly suspicious with Vera only being separated for a few weeks! Perhaps, the designer’s next season of wedding gowns will include some cougar prints.