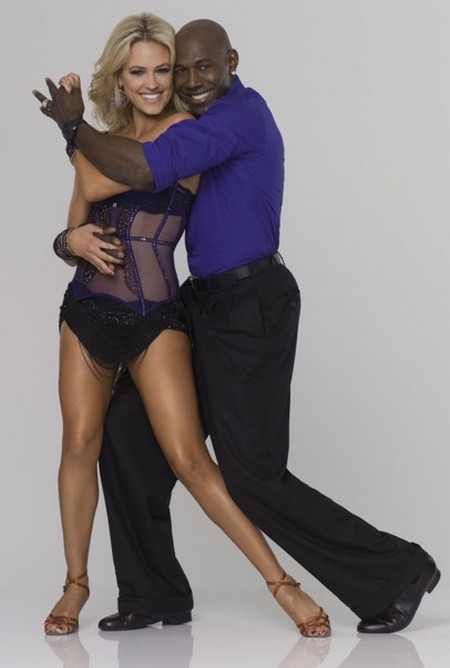 Donald Driver danced the Cha Cha Cha for his 24 hour dance challenge tonight on the finale of Dancing With The Stars.  Tonight we will get to see which of the three remaining contestants, William Levy, Donald Driver or Katherine Jenkins will win the Mirror Ball Trophy.  Will it be Donald.  If you missed tonight’s show you can read our full and detailed recap here!

Donald Driver and professional dancer Peta Murgatroyd, dancing the Cha Cha Cha – they had 24 hours to pair their dance style of choice to music given to them after Monday night’s show. This routine will be scored out of 30 and will round out the judges’ scores across both nights.

Peta says the pressure is on for them tonight.  They are excited to do their dance and they were happy with their performance last night.

Judges Comments: Carrie Ann: You are such a fierce competitor. I can see your love for the show, and you are determined to win and I think you are the one to beat.  Len:  My feeling is no one is a loser tonight. I think all three of you are absolute winners. We have had some great footballers over the years but my feeling is your the best.  Bruno:  I have to say, another massive hit for Donald the magnificent. You had the strategy of a champion. You improved week after week and you peeked at the right time.

Dancing with the Stars’ 2012 mirror ball trophy winner will be revealed tonight based on the combination of the judges’ score shares for the dancers’ Monday night performances, and the share of home viewer votes cast immediately after Monday night’s broadcast.

Watch the video below and let us know what you think?  Did Donald do enough to win? Sound out in the comments below!