BY Robyn Good on May 22, 2012 | Comments: Leave Comments
Related : Dancing With the stars, Dancing With The Stars Season 14, Donald Driver, Reality TV 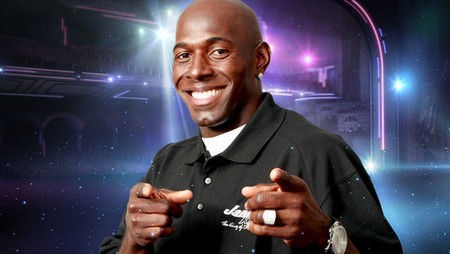 Green Bay Packers wide receiver, Donald Driver won Dancing with the Stars 2012. Last night, his performance blew the judges away, did you see the episode? If not, you can read the full recap HERE and watch his awesome performance that really impressed the judges HERE.

Donald definitely had the top performance of last night with his “Gone Country” theme, the judges loved the performance and Carrie Ann actually said it was by far her favourite dance this season! The 37-year old has been at the top of the leader board throughout this competition – even impressing Len, at least once.

I don’t think there has been another contestant that wants the Mirror Ball trophy as bad as Donald wants it, in fact, he has already told his kids that he is bringing it home to Titletown.

Donald has certainly put everything into his performances week after week with the support of his dancing partner, Peta Murgatroyd. In his private life, Donald gets a lot of support from his wife, Betina. Here’s what Donald told the LA Times, “When we started dating she put her foot down and said it’s either me or the drug dealing. I didn’t want to lose her so I knew what I had to do. I truly don’t know where I’d be without her. The support she has given me throughout our entire marriage, including this competition, has been amazing. Without her or the kids by my side I wouldn’t have been able to make it as far as I have.”

Overcoming childhood homelessness and other obstacles, Donald fought very hard to become a Super Bowl Champion and here’s something you may not know about him, he is the author of three children’s books that are based on bedtime stories to his three children.

Do you think Donald deserved to win? Sound off your comments below and tells us what you think about Donald’s Dancing with the Stars season 14 experience.