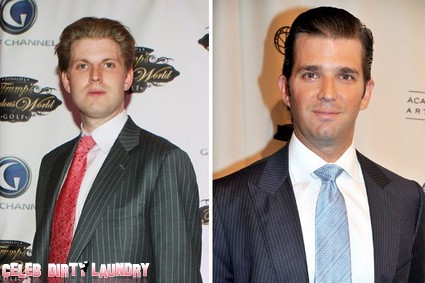 Donald Trump‘s sons favorite pastime – shooting helpless, defenceless animals and then posing with their dead carcasses – has come back to bite the Don where it hurts … his bank account. A sponsor for his TV show doesn’t want any more to do with the businessman and has pulled the pin on a lucrative advertising contract.

According to TMZ …Camping World is outraged by the  exploits of spoilt rich kids Donald Trump Jr and Eric Trump and so they should be. CEO Marcus Lemonis can’t believe the boys boasted about their killings while on safari in Zimbabwe last year – Celeb Dirty Laundry covered it here Donald Trump’s Sons Love Killing Animals (Photo). The pair hunted down several animals – including an elephant and crocodile – and then posed for happy snaps.

Now Marcus doesn’t want to be affiliated with the family in any way, shape or form. So he’s voted with his credit card and is taking his Celebrity Apprentice advertising elsewhere. He says ‘I am totally disgusted by the [hunting] pics I have seen and was surprised to see them. I’m really shocked‘ A couple of Camping World spots have already aired during the current season because the Trump animal killers were only exposed this week. But Marcus insists any further business dealings with the Trump empire is off the cards ‘I wouldn’t spend another nickel with them‘

The hunting story has sparked plenty of debate. Some celebrities have even weighed in  Comedian Lisa Lampanelli Supports The Trump Sons Hunting Lifestyle But now it’s getting serious for the Trumps because it’s hurting the one thing they value above all else – money. I think Donald Jr and Eric will be getting called into the boardroom very soon!