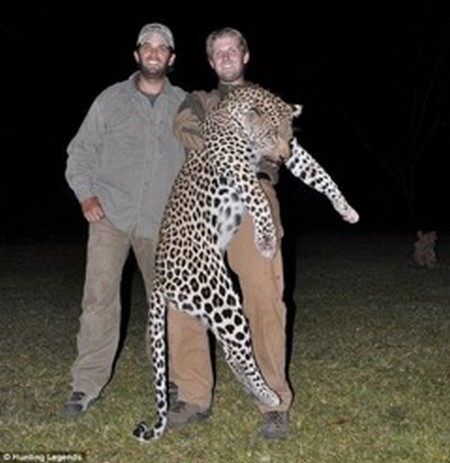 Isn’t killing and maiming animals a sign of a psychopath? Donald Trump’s sons Donald Trump Jr. (yeah, that’s his actual name) and Eric Trump are polarizing the public today after pictures of them on a 2010 African hunting trip surfaced online. The pictures, posted by the Zimbabwe based hunting company, Hunting Legends, show the Manhattan heirs posing next to the carcasses of several animals including a crocodile, a water buck, and a civet cat. One particularly grotesque picture show’s Eric Trump holding up a severed elephant tail—perhaps as a size comparison for what he is NOT packing in the pants.

Animal rights group PETA blasted the Trump boys through E! News saying, “If the young Trumps are looking for a thrill, perhaps they should consider skydiving, bungee jumping, or even following in their anti-hunting father’s footsteps and taking down competing businesses—not wild animals.”

In fact, while his hair may suggest otherwise, The Donald claims not to be a fan of hunting. “My sons love hunting. They’re hunters and they’ve become good at it.  I am not a believer in hunting and I’m surprised they like it,” Trump told TMZ, adding that he’s sure the boys have the support from the hunting community.

Eric and Donald Jr. made it clear they have no remorse following the backlash and fired back at twitter critics. They also told E! News: “We are both avid outdoorsmen and were brought up hunting and fishing with our Grandfather who taught us that nothing should ever be taken for granted or wasted,” they said in a joint statement, adding, “We have the utmost respect for nature and have always hunted in accordance with local laws and regulations. In addition, all meat was donated to local villagers who were incredibly grateful.”

Awww, how charitable of them. Maybe, when the safari industry is dead because all the animals have been shot by rich, white douche bags, the Trump brothers can help out again by borrowing a couple of costumes from Broadway’s “The Lion King” and put on a show for the tourists. “Look to your left and you’ll spot an ass!”

Joke’s aside, PETA said it best: “Like all animals, elephants, buffalo, and crocodiles deserve better than to be killed and hacked apart for two young millionaires’ grisly photo opportunity. If the Trumps want to help villagers, they have plenty of resources at their disposal.”

I might understand moderate hunting as a logistical necessity, a cultural right of passage or in terms of overpopulation control— but these two represent the worst of the worst, spending ostentatious amounts of money to prove that they are indeed men. Next time, maybe they should save the PR crisis and stick to their father’s way of validation by making employees feel useless and by paying beautiful women to have sex with them.