‘Don’t Remember Me Like This,’ Whitney Houston Pleaded Before Her Death (Photo) 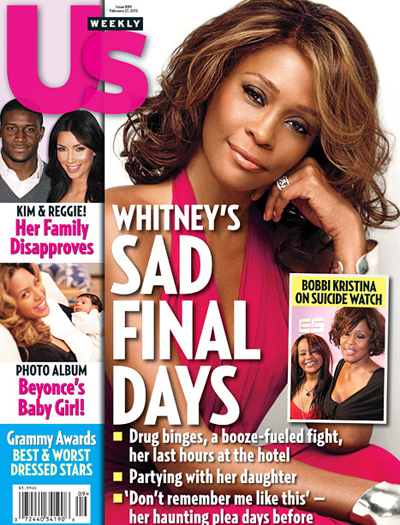 The current issue of US Magazine features the cover story ‘Whitney Houston‘s Sad Final Days.’ Inside, the magazine recounts the last few, tragic days in the life of the beloved pop singer, who passed away on Saturday at the age of 48.

Reportedly, Whitney, who was widely known to have a substance abuse addiction, had fallen off the wagon yet again and the final days of her life were supposedly spent in a drug-induced haze. When she wasn’t partying with her daughter Bobbi Kristina Brown, she was binging on drugs and even got into a booze-fueled fight hours before her death at the Beverly Hilton Hotel!

“Don’t remember me like this,” Whitney hauntingly pleaded just a few days before her death, US reports. Could she have had a premonition that the end was near?

The magazine also reveals details about the funeral arrangements for the Grammy winner, which will reportedly take place this coming weekend.

At the request of her mother Cissy Houston, Whitney will be eulogized by the gospel singer Marvin Winans at the New Hope Baptist Church in her hometown of Newark, New Jersey. Touchingly, it was Marvin, who was the one who officiated Whitney’s 1992 wedding to her ex-huband Bobby Brown, so it seems fitting that he will be the one to memorialize her.

New Jersey Governor Chris Christie has also requested that all government flags be flown at half-staff on Saturday, in memory of the late singer.

To find out more about Whitney Houston’s tragic last days and the plans for her funeral – pick up the current issue of US Magazine for all the details!