Dr. Conrad Murray Tries To Play His Get Of Jail Free Card 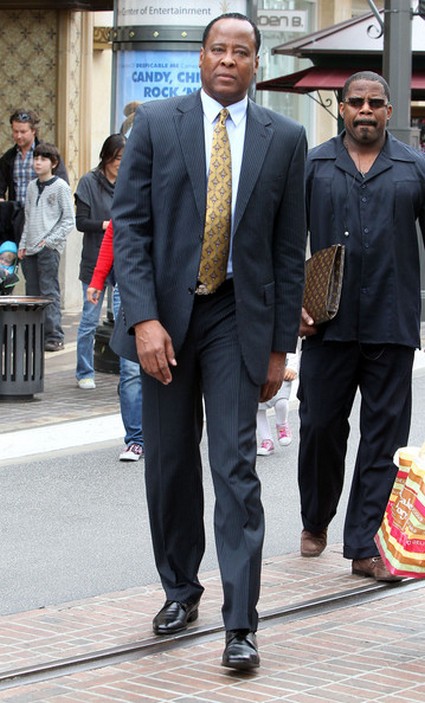 Dr. Conrad Murray, convicted of the involuntary manslaughter of Michael Jackson and sentenced to 4 years in prison, has just filed legal documents asking a judge to release him from jail. Murray is not asking to simply be released and all be forgotten but he is hoping to be set free pending the appeal of his conviction.

Murray is wishing that he will be allowed to live with Nicole Alvarez, his baby mama, so as to seek employment and support his children. He sure won’t be doctoring anyone now that his medical licence has been revoked – perhaps he is thinking of giving interviews for cash?

Murray’s request for freedom is based upon his appeal of his conviction which he filed himself in early December. Nareg Gourjian, a lawyer who represented Murray at his manslaughter trial said at the time:

“This case presents a gold mine of issues for any appellate lawyer. Dr. Murray is confident that the Court of Appeal will vindicate him.”

Who can say for sure – Casey Anthony and O.J. Simpson both were found not guilty of murders they obviously committed – why can’t Murray beat the system as well?

TMZ has the scoop:  Murray claims in his legal docs he has a legitimate basis to appeal his manslaughter conviction. Among the grounds for appeal — “improper exclusion of defense evidence and witnesses that resulted in violating the defendant’s State and constitutional rights to due process, to present a defense and to the effective assistance of counsel.”

Murray’s lawyer also says, “He has exhausted virtually all of his available resources.”

Murray is asking to be released on no bail pending the appeal.

If released, Murray says he plans to live with his baby mama Nicole Alvarez — and would be willing to wear an electronic monitoring bracelet.

Murray says he would also seek employment to support his children — though it’s unclear what work that would entail … considering his medical license has been unceremoniously revoked.

To illustrate his dire circumstances behind bars, Murray’s lawyer says the ex-doctor is housed under “maximum security” conditions — isolated in a solitary cell, and escorted around the jail facility with his hands chained to his waist.

Why not let Murray free while he appeals his conviction? Because he is guilty, sentence has been passed, and he needs to pay for his crimes NOW!