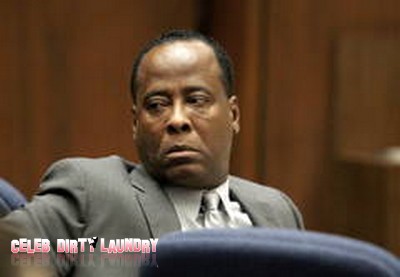 Dr. Conrad Murray has filed an appeal, representing himself, challenging his conviction for involuntary manslaughter in the death of Michael Jackson.

According to TMZ, Murray filed the document in pro per which means he’s representing himself instead of using a lawyer.  On the portion of the document where a lawyer will usually state his or her firm’s contact information Murray lists ‘Men’s Central Jail’ and includes his booking number.

Sentenced Tuesday to 4 years in prison for Michael Jackson’s death, it was expected that Dr. Murray would appeal. Dr. Murray’s sentence according to Judge Michael Pastor will include “appropriate restitution,” but the judge said said he would need more information before deciding on the amount. The prosecution has demanded that Dr. Murray pay $100 million to the Jackson estate and his three children. Judge Pastor set a date of January 23, 2012 for a hearing on the amount of the restitution.

While he is representing himself, Murray is still communicating with one of the lawyers who represented him in the manslaughter trial, Nareg Gourjian.

TMZ reports Gourjian as saying: “This case presents a gold mine of issues for any appellate lawyer. Dr. Murray is confident that the Court of Appeal will vindicate him.”

Because he received the maximum sentence allowed by law for the crime of which he was convicted, and now faces perhaps millions of dollars in restitution payments, Dr. Murray has nothing to lose by appealing.