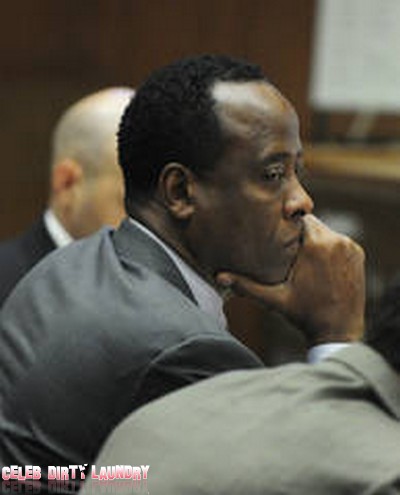 Dr. Conrad Murray wept as heard defence witnesses give positive evidence about how great a doctor he is during his involuntary manslaughter trial today. Of course Dr. Murray was crying and that is because he is f**ked. His chances of escaping this trial and practicing medicine again are zero – as they should be.

Its great that Dr. Murray can drum up a few people willing to testify to his better side. But it’s not Murray’s character or past good works that are on trial – it’s his treatment and mistreatment of poor Michael Jackson that is on trial – and of that mistreatment there can be no doubt.

The physician’s defense team called five character witnesses to take to the stand to speak about Murray’s past records a medical professional.

The doctor – who is accused of causing the death of Michael Jackson in June 2009 by giving him the anaesthetic Propofol as a sleeping aid – wiped away tears as he listened to the witnesses speak, including the testimony of Ruby Mosley who told jurors how he had founded a clinic in a poor community in Texas in honour of his late father.

Mosley said: “If this man had been greedy, he never would have come to an area or community of Acres Homes, 75 per cent of them poor, on welfare and social security.”

The prosecution has accused Murray of being motivated by the $150,000-a-month salary he was being paid to treat Jackson and claim he left him alone after administering the dose of Propofol.

Andrew Guest told the court the physician had saved his life when he treated him for a heart condition in 2002.

Guest said: “That man sitting there is the best doctor I’ve ever seen. I’m alive today because of that man.”

All the five character witnesses were patients at Murray’s Las Vegas and Houston practices and he was described as a caring doctor who would spend hours with his patients and offered his services for free to patients who couldn’t afford to pay.

Lunette Sampson – a patient at Murray’s Las Vegas practice who had been treated for several heart attacks and blockages in her heart and legs – said: “Dr. Murray is not the type to rush through a procedure. When we come, we know he is going to be there for a while.”

After jurors left for the day, Superior Court Judge Michael Pastor asked Murray if he intended to take to the stand himself.

He told the doctor he would expect an answer from him later this week.