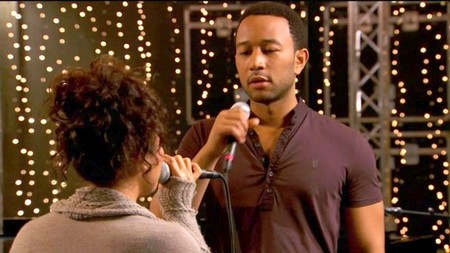 Tonight on ABC is an all new episode of DUETS. On tonight’s show the theme is “Favorite Standards” so we can expect a lot of singing and dancing. If you missed last week’s show, we have a full and detailed recap here for you.

On last week’s show it was “Songs from the 2000’s” theme and surprisingly J Rome didn’t bring in as strong as a performance as everyone had hoped. He sang “Without You” by Usher and David Guetta with his Duet partner Jennifer Nettles (who by the way announced on the show last week that she is pregnant). The performance was weaker according to John, Robin loved Jennifer more than J Rome.

In another surprise last week, Jason Farol sang “Mercy” with his Duet partner, Kelly Clarkson and all the judges loved the singing, but still felt that Jason needed to work on his stage presence.

There were no final standings for last week because it was the first live show and superstars Kelly Clarkson, John Legend, Jennifer Nettles and Robin Thicke took the stage with their remaining Duet partners; J Rome, John Glosson, Bridget Carrington, Olivia Chisholm and Jordan Meredith  and Jason Farol to perform their favorite songs from the millennium. Last week was the first live episode and viewers got to finally vote. Tonight we will find out who America voted for and whomever receives the lowest number of votes will be eliminated.

On tonight’s show,the superstars take the stage with their remaining Duet partners for an evening of standards from the Golden Age of music.  Last week America voted and those results will be announced eliminating one amateur so that only four remain in the competition. At the end of tonight’s show, the polls will open again and America will vote for the top three.

Stay tuned for our live coverage of the show tonight for the awesome “Favorite Standards” theme at 8:00 PM EST! Meanwhile, while you wait, hit the comments and let us know what you think of Season 1 of “Duets” so far!

RECAP: Jennifer Nettles and Robin Thicke open the show singing, “Crazy Little Thing Called Love”. Tonight the show is live and they will be bringing us songs from the standards with some of the biggest songs in the day.

Superstar Comments: Kelly thought it was her favourite performance; it was so classic, beautiful and effortless. Robin loved it and wishes that John would remake it. Jennifer felt Bridget brought poise and class, overall so polished and beautiful.

John Legend and Kelly Clarkson gives us a special performance of “You Don’t Know Me” by Ray Charles.

Jennifer Nettles and John Glosson perform “Georgia On My Mind” by Ray Charles.

Superstar Comments: Robin thought it was amazing, just great. Kelly had a hard time hearing it, but still loves his voice. John thought it was perfect, just the right amount of syrup.

Superstar Comments: John has been sceptical about Jason, but he feels that he has gotten so much better. Robin thinks Jason is adorable, but he missed a little bit of the soulfulness in that song. Jennifer thinks he has a lot of dedication and how much he has grown is inspiring.